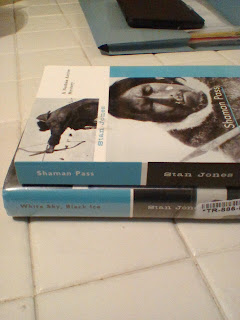 One of my online friends read and reviewed Stan Jones and one or other of his books earlier this year. I was interested at the time and kind of hummed and hawed over whether to take the plunge. Was it ever in doubt? 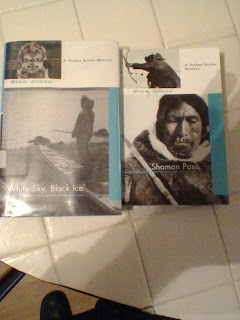 Great covers and some promising mysteries set in an area of the world that I have never visited before in my reading. To date there have been four Nathan Active series books published, and yes I did buy the other two also. That probably sums up my reading/library/TBR issues. How can you commit to buying four books from an author that you haven’t read one thing by? What if I don’t particularly enjoy the first? No way is Stan Jones an isolated instance either, for him you could probably substitute fifty other names. I’m like a greedy child let loose in a sweet shop...what was the child’s name in Willy Wonka?

Anyway hopefully the first in the series rocks and even if it doesn't, I ought to read the following ones as penance for my own rashness.

This will cover my Alaska state entry when I start my USA state reading challenge next year.

Thanks to Keishon at Yet Another Crime Fiction Blog. Her reviews are here:
White Sky, Black Ice
Shaman Pass 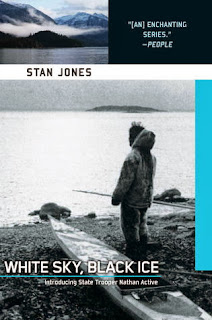 Yet Another Crime Fiction Blog
An Alaskan State trooper must satisfy both Eskimo and "white man's" justice.

Trooper Nathan Active, child of a fifteen-year-old unmarried Inupiat Eskimo girl, was given up for adoption and raised in Anchorage, where he graduated from the university. Now that he has been posted to his remote birth village, Chukchi, he longs to return to civilization. Before that happens, he is confronted with atypical suicides. Eskimos are notoriously at risk for self-slaughter, but never has one man after another shot himself in the Adam's apple. Can a shaman's curse really be at work?

Lucy Generous is a beautiful villager who is enlivening Nathan's tour of duty. Nathan's mother tells him to beware; she wants him to find a girl who went to college and has a good job. But with Lucy's help, the nalauqmiiyaak (almost white) state trooper begins to understand his Eskimo heritage, which provides him with the solution to the crimes that he is confronted with.

This is the first in a series of Nathan Active mysteries. 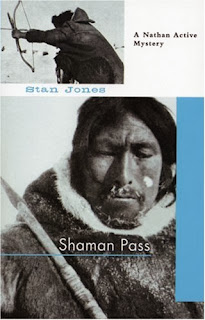 A Murder With A Motive Steeped In Inupiat Tradition

Nathan Active is regarded as 'half white' by Alaskans. He is a state trooper, adopted and raised in Anchorage, but now serving a tour of duty in Chukchi, the village of his birth, where he is called upon to investigate the murder of an Inupiat tribal leader. The victim was killed with an antique ivory and wood harpoon returned to the community by the Smithsonian, in accordance with the terms of the Indian Graves Act, just a few days earlier together with an unidentified Inupiat mummy nicknamed 'Uncle Frosty.'

With the help of his girlfriend, birth mother, aged grandfather, and other old-timers, Nathan must grapple with the identity of the murderer and the elusive motive.