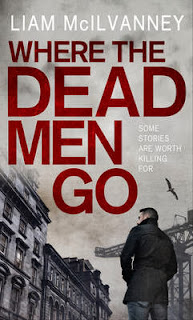 After three years in the wilderness, hardboiled reporter Gerry Conway is back at his desk at the Glasgow Tribune. But three years is a long time on newspapers and things have changed - readers are dwindling, budgets are tightening, and the Trib's once rigorous standards are slipping. Once the paper's star reporter, Conway now plays second fiddle to his former protege, crime reporter Martin Moir. But when Moir goes AWOL as a big story breaks, Conway is dispatched to cover a gangland shooting. And when Moir's body turns up in a flooded quarry, Conway is drawn deeper into the city's criminal underworld as he looks for the truth about his colleague's death. Braving the hostility of gangsters, ambitious politicians and his own newspaper bosses, Conway discovers he still has what it takes to break a big story. But this is a story not everyone wants to hear as the city prepares to host the Commonwealth Games and the country gears up for a make-or-break referendum on independence. In this, the second book in the Conway Trilogy, McIlvanney explores the murky interface of crime and politics in the New Scotland.

Another new author for me though I do have a copy of his debut novel – All The Colours Of The Town – sitting on the pile of unreads.  Where The Dead Men Go is Liam’s McIlvanney’s second fiction outing and another book concerning his journalist Gerry Conway.

Having recently finished Malcolm Mackay’s Glasgow hit-man debut earlier this month, it was strange landing back amongst Glasgow’s criminal fraternity this time viewed through the eyes of a hard-bitten hack. There is a common theme with these two books, namely organised crime. Does Glasgow suffer from gangs, drugs and prostitution to a greater or lesser extent than any other inner-city in the UK? Probably not. When the gangland rivalries do explode into violence, Glaswegian style the shadow of bigotry and sectarianism hangs over it, whether as the reason, a factor or as misdirection to confuse the authorities.

Our main man, Gerry Conway has baggage to carry both on a personal front and career-wise. He’s back at the struggling Tribune a few years after his sacking and living in a flat with his girlfriend and baby son; whilst maintaining regular contact with his two boys from his failed marriage.

Martin Moir, one time underling of Conway and now the star turn at the Tribune disappears and Conway gets shunted from his desk covering politics to fill the void on the crime desk. He’s assigned to report on a shooting on a soccer pitch. The discovery of the victim’s identity, threatens a return to the bad old days of feuding and blood-letting as the city’s gangs jostle for ascendancy and payback.  When the gangland rivalries do explode into violence - Glaswegian style - the shadow of bigotry and sectarianism hangs over it, whether as the reason, a factor or as misdirection to confuse the authorities. The rest of the city braces itself for the backlash in the mean-time.

When Moir’s body is found in his car at the bottom of a quarry, Gerry gets the crime gig on a more permanent basis. Moir’s death is ruled a suicide, but with Conway and Moir’s wife unconvinced, our intrepid reporter digs into Moir’s recent investigations and peels back the lid on a can of rotten worms....... murder, prostitution,  pay-offs, corruption, dodgy contracts with the crime bosses and politicians as well as the media-hounds all inhabiting the same flea-ridden pit.

Where The Dead Men Go was a superb read and a great introduction to another newish crime author for me. It registered slightly lower on the Richter scale for me than Mackay’s Lewis Winter book, but it was extremely enjoyable nonetheless.