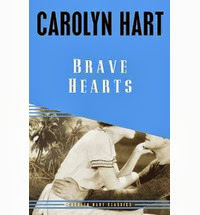 Catharine Cavanaugh was the beautiful wife of an ambitious American diplomat - a woman who denied her passions and hid her regrets. Jack Maguire was a brash reporter who lived by his wits and broke all the rules. In a moment, their lives touched and a dangerous love was born. From bomb-shattered London to the besieged Philippines, Catherine and Jack were caught in the sweeping tides of war. Finally, Catherine was forced to make a choice between keeping her love trapped inside her forever, or embracing the joy meant for only for brave hearts...

My second taste of Carolyn Hart’s fiction after last month’s impressive introduction to her work with Death By Surprise.  Brave Hearts is a standalone book that was originally published back in the late 1980’s.  The novel revolves around US diplomat, Spencer Cavanaugh, his wife Catharine and a journalist, Jack Maguire whom she crosses paths with at a dinner at the Ritz, during the time of the Blitz.

The Cavanaugh’s are locked in a loveless marriage, but still bound together by the needs of Spencer’s career and the necessity of portraying a certain image to the US’s allies during the early days of WW II. As the novel unfolds we follow the three leads and their complicated personal lives from war-torn London to the Far East and Manila before the Japanese strike at Pearl Harbour. The subsequent invasion of the Philippines and desperate retreat of the US forces does little to smooth the path towards true love.

It would be fair to say, I didn't enjoy this quite as much as the previous novel of hers that I read. I was intrigued by the characters and was piqued enough to care about whether they would survive the war in the Pacific. The personal relationships between the three and several other minor players in the book made for interesting reading and I happy enough to read on and see how things were resolved.

The major plus points for me were in Hart’s depiction of war-torn London suffering under the relentless bombing of the German air force. Similarly when transporting the action to the Pacific islands caught in the conflict, the writing brought home the brutality of war and the harshness of the conditions under which people struggled to survive.

On balance the romantic elements of the book were a bit too much for my taste. Much grittier than your average Mills and Boon offering (I guess) but I did have to roll my eyes a few times, as yet another bout of tonsil hockey was followed by some frantic plunging and coupling.

Overall I found Brave Hearts an enjoyable and satisfying read, with a few minor reservations.

I was grateful to Meghan at Prometheus books for my copy.