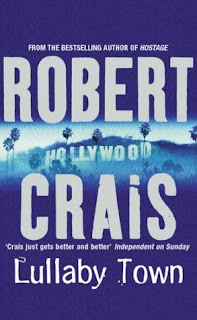 
Peter Alan Nelsen is a super successful movie director who is used to getting what he wants. And what he wants is to find the wife and infant child he dumped on the road to fame. It's the kind of case that Cole could handle in his sleep, except that when Cole actually finds Nelsen's ex wife, everything takes on nightmarish proportions a nightmare which involves Cole with a nasty New York mob family and a psychokiller who is the son of the godfather. When the unpredictable Nelsen charges in, an explosive situation blows sky high.


This is the 3rd Elvis Cole book in the series. I read or possibly re-read the first 2 last month, memory being not quite what it used to be. The laid-back LA private investigator and his erstwhile side-kick Joe Pike team up again when hired to track down a Hollywood hotshot’s long divorced wife and son.


Cole achieves this fairly effortlessly, but when threatened and beaten after confronting the ex-wife, digs deeper. Kathy, the ex and now a successful businesswoman and bank manager is being coerced by the mob to launder cash through her bank. Cole, always a sympathetic ear for a damsel in distress holds off from reporting back to his employer, endeavouring to try and extricate Kathy from Charlie DeLuca clutches first. The problem is DeLuca instead of being a reasonable businessman, albeit operating outside the law is also the psychopathic son of a crime lord.


At about 230 pages long, and without taxing my brain too much, Lullaby Town was a quick, fast-paced enjoyable read. I’ll be trying to locate the 4th instalment buried somewhere in the depths of my disorganised attic library – Free Fall – to read next month.