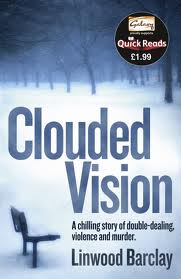 
Keisha Ceylon is a psychic. At least, that's what she passes herself off as. The truth is, Keisha's real powers have more to do with separating troubled families from their money than actually seeing into the netherworld. Keisha watches the news for stories of missing family members. She gives it a few days, then moves in, tells these families she's had a vision, that she may have some clue to where these missing people are. And by the way, she charges for this service, and likes to see the money up front.


Keisha's latest mark is a man whose wife disappeared a week ago. She's seen him on TV, pleading for his wife to come home, or, if she's been abducted, pleading with whoever took her to let her go. Keisha knows a payoff when she sees one. So she pays a visit to our troubled husband, tells him her vision.


Trouble is, her vision just happens to be close enough to the truth that it leaves this man rattled. And it may very well leave Keisha dead.


This was one of these Quick Read books approximately 100-odd pages long. The Quick Reads Initiative was launched back in 2006; designed to encourage adults who don’t read often, to discover the joy of books. An admirable aim, with over 60 titles published since, by both best-selling authors and celebrities.


I’m probably not the target market for this type of book, but hey if there’s something out there by an author I enjoy, why not?


An interesting enough story, not too complex, the ending was a little bit telegraphed, but it passed a couple of hours in a decent fashion, so I’m not going to knock it. It won’t remain long in the memory banks though, if I’m honest.


Missing wife and mother, TV appeal for information, charlatan psychic on the case for a quick cash return, meets with anguished husband.........bet she wishes her crystal ball had been working that day!


Acquired from the useful Readitswapit website in exchange for something I was finished with.