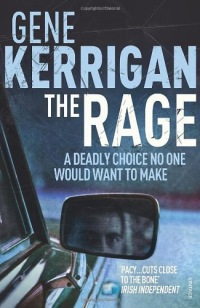 
Vincent Naylor, a professional thief, is fresh out of jail. His latest project, an armed robbery, is just days away.


Bob Tidey, an honest, hardworking policeman, dedicated to public service, is about to commit perjury.


Maura Coady, a retired nun living in a Dublin backstreet, is lost in bad memories and regrets. Then, she sees something that she can't ignore, and makes a phone call that will unleash a storm of violence.


As one of the reading challenges I have set for myself, I’m trying to read one book a month that has been a recipient of a major crime writing award. Kerrigan’s The Rage won the 2012 CWA Gold Dagger  and as it was a Christmas present from my better half just a few months ago it seemed as  good a book as any to be reading right now. Familiarity with Kerrigan’s previous work was an added incentive to crack the spine on this. I read Little Criminals a fair few years ago and more recently his Dark Times In The City; both of which were extremely enjoyable.


Dublin, post-Tiger crash is the setting for Kerrigan’s Rage. It’s a collision of forces in what is an increasingly fractured and secular society with a mix of career criminals, police, lawyers, nuns, violence, guns, murder, sex, alcohol, abuse, religion, guilt, damaged families and politics.


As well as providing a driving plot that unfolds quickly, Kerrigan has the ability to depict his characters convincingly. His main villain, Vincent Naylor had enough likeable traits of personality that I was conflicted as to how I wanted the book to conclude. Conversely, his good guys have failings and faults and are all the more believable because of it. Bob Tidey, his policeman isn’t above breaking a few rules if it helps him get closer to resolving his investigations, but he never seems to stop caring for the victims he’s met along the way. He’s flawed but retains a decent sense of humanity.  Others are similarly afflicted; people with regrets and guilt over previous failings and poor choices. Real people living real lives.


This is a superb book about modern Dublin and the harsh realities of everyday life, with ever-increasing levels of violence and criminality.


“A world this ugly, I’d rather look away,” laments one of the sadder characters within Kerrigan’s “Rage,” but with writing this crisp you can’t.


As mentioned above this was a Christmas present last year – one of my better ones!
Posted by col2910 at 02:02