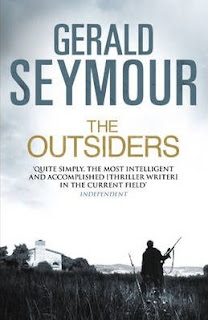 Winnie Monks has never forgotten - or forgiven - the death of a young agent on her team at the hands of a former Russian Army Major turned gangster. Now, years later, she hears the Major is travelling to a villa on the Costa del Sol and she asks permission to send in a surveillance unit.

They find an empty property near the Major's. The Villa Paraiso. It's perfect to spy from - and as a base for Winnie's darker, less official, plans.

But it turns out that the property isn't deserted. The owners have invited a young British couple to 'house sit' while they are away.

For Jonno and Posie, just embarking on a relationship, this is supposed to be a carefree break in the sun. But when the Secret Service team arrives in paradise, everything changes.


I picked up my first Seymour book last year, which was his debut novel, Harry’s Game – first published in 1975. Enjoyable it was too with a four star rating on the Keane scoreboard.


The Outsiders is his 29th book and was released last year.


This time around the story was a bit more complex with various players in separate strands of the British intelligence services, along with European equivalents, several Russian groups – both operating on the far side of legality, a couple of low-life Costa criminals and an unwitting couple of holidaymakers-cum-house sitters.


Seymour’s depiction of the Costa del Sol and its changing landscape both physically and ethnically with the influx of Eastern European mafia and money, and the local authorities tolerance/indifference to it in these cash straightened times was eye-opening and disturbing. Whilst his book is fiction, I would have to believe that the author’s research would in fact support these illustrations as having some factual standing. Maybe I don’t get too much European news, living as I do in my cave in Leighton Buzzard, but I was wholly unaware of this development, or maybe it just hadn’t registered.


Seymour also reminds us that the good guys don’t always dress in white, blurring lines of both legality and morality in the interests of a result.  Does the end always justify the means, or do we play by the rules?


Interesting characters, decent storyline, compelling situations racked with tension, mainly delivered at pace and with an ending that remains in doubt until the last (nearly).


Very enjoyable and a great way to start my new reading month. I just need to read more of the 27 books that sit in the middle.


Borrowed from Leighton Buzzard library
Posted by col2910 at 04:12