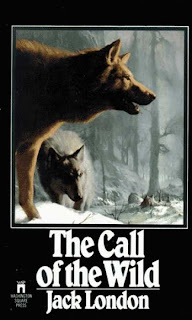 The story takes place in the extreme conditions of the Yukon during the 19th-century Klondike Gold Rush, where strong sled dogs were in high demand. After Buck, a domesticated dog, is snatched from a pastoral ranch in California, he is sold into a brutal life as a sled dog. The novella details Buck's struggle to adjust and survive the cruel treatment he receives from humans, other dogs, and nature. He eventually sheds the veneer of civilization altogether and instead relies on primordial instincts and the lessons he has learned to become a respected and feared leader in the wild.

Published back in 1903 after the author had spent sometime in the aforementioned Yukon.
I was looking for something a little bit different and quick to read after getting bogged down by another book which I wasn't enjoying.

I had previously heard of this book, hasn't everyone(?) but can't recall reading it ever during my near half-century of years, not even in the dim and distant days of school. Glad I made the effort though.

Gripping, exciting, moving.......a testament of an indomitable spirit, bravery, determination, loyalty, fearlessness, and probably another dozen or so admirable attributes. Sad in places, but ultimately an uplifting and rewarding read.

I wouldn't put it past me finding more from London in the future.