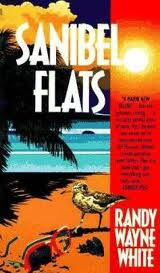 Its cool gulf breezes lured him from a life of danger. Its dark undercurrents threatened to destroy him.After ten years of living life on the edge, it was hard for Doc Ford to get that addiction to danger out of his system. But spending each day watching the sun melt into Dinkins More...Bay and the moon rise over the mangrove trees, cooking dinner for his beautiful neighbor, and dispensing advice to the locals over a cold beer lulled him into letting his guard down.Then Rafe Hollins appeared.How could he refuse his old friend's request-even if it would put him back on the firing line? Even if it would change forever the life he'd built here on Sanibel Island?

Over the years I have enjoyed a fair few crime fiction books set in and around Florida. A couple of names spring to mind as being near the top of the list of my favourites – James W. Hall and Carl Hiaasen. Both of these I have followed fairly closely, maybe not reading every book as it came out, but acquiring them later, to add to the ever-increasing pile on Mount TBR.


Possibly, there could be another name to add to the list. I say possibly, because I’ve only just read the first title in a series that to date runs to 20 books. A friend tells me the wheels fall off at or around book 12, in her opinion, but I’ve enjoyed this one enough to want to hunt down the 2nd and I’ll stick with author White and Doc Ford for a while longer.


Ford is an ex-CIA agent now out of the business. He’s living his life at a slower pace, getting by using his skills as a marine biologist to supply samples to schools and colleges throughout the country. He’s formed some easy friendships with the locals without giving away too much of himself.


Cue mayhem; a call for help from his best childhood friend, Rafe Hollins rips apart his sedentary lifestyle. Hollins’ son has been kidnapped and he wants to enlist Doc’s help in recovering him, in exchange for the merchandise Hollins stole from them. When Doc goes to meet Rafe he finds a corpse swinging in the breeze instead.  With his friend gone and his young son missing Ford starts looking into Hollins associates and past.


As the plot develops, Ford’s investigation uncovers corruption in Florida, smuggled artefacts and he suffers a trip back to the same Central American war-zone that was the scene of his previous retirement.


Fairly fast-paced, interesting and at times informative, I enjoyed reading Sanibel Flats. There’s a likeable cast of characters that White has assembled around the Doc that I’ll look forward to meeting again.


I bought my copy on Amazon UK.