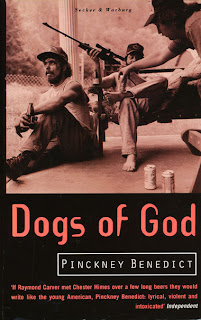 
A tale of malevolence and violence, this "stunning novel" (New York Times Book Review) is the story of Tannhauser, a crazed backswoodsman turned drug lord, and the idiosyncratic characters who are enticed into his destructive orbit.


I’ve had this book sat on my shelves unread since I bought it new back in either 1994 when it was first published, or a bit later in 1995. Eighteen years on Mount TBR has got to be some sort of record, for me at least. I’ve previously attempted to read it more than once, but could never get more than about 30 pages in, before turning to something else. Well this time around, I got past the initial stumbling blocks and finished.


“Dogs” is populated by the kind of people, I like reading about but wouldn’t want to meet.


Tannhauser is a 12-fingered, ex-military drug dealer. He’s commandeered an abandoned women’s prison, burnt out the hippies that were growing their own weed there, literally and has his own captive, migrant work crew. The local sheriff’s on the payroll and with a massive arms shipment arriving in exchange for his crop, he’s looking to expand the operation. Cruel, ruthless and psychopathic; he’s running the show.


Goody, a drifting bare-knuckle fighter who has a match-up with Tannhauser’s bodyguard, Yukon arranged by Inchcape - a sometime farmer, part-time truck driver and Goody’s landlord.


Carmichael’s the DEA agent tasked with getting to grips with West Virginia’s burgeoning marijuana crops. He’s running an operation that’s targeting Tannhauser and which will cause conflict between the local law and their unofficial paymaster.


Bodo and Toma are outsiders; commodity dealers brought into the mix with their arms shipment in exchange for Tannhauser’s dope.


Pilot and co-pilot; two guys with a have plane, will smuggle mentality.


Benedict deals in other characters whose significance eludes me – an anchorite, which after googling is apparently a spiritual person who is living as a hermit and Peanut another drifter, ready to assume Yukon’s mantle after his catastrophic collision in the ring with Goody.


The book throughout is violent and for the most part interesting. The boxing scenes and the wild boar hunt are compelling and fantastic, but ultimately I put it down feeling slightly unsatisfied. Whether the anchorite and the apocalyptic climax has some allegorical meaning, I’m unsure – I’m not a student of the Old Testament or Aesop or Greek mythology so will pass on that one.


The passages earlier in the book concerning the underground caves in the region, that run for miles and miles, seem a convenient device at the end to allow one of the participants to ultimately survive the carnage Benedict wreaks on nearly everyone.