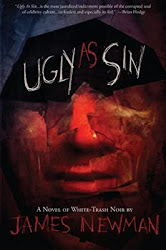 Nick Bullman was a wrestling superstar. His alter ego, The Widowmaker, was the monster heel all the marks loved to hate.

Now, after a brutal encounter with two psychotic fans that left his face horribly disfigured, he’s just a monster.

Yanked from the spotlight and thrust into the shadows, these days Nick tries to live the life of an average Joe. He avoids mirrors. He's angry. He’s alone. And he likes it just fine that way...

Until he receives a desperate phone call from a young lady he barely knows—his daughter.

For the first time in over thirty years, Nick returns to his hometown of Midnight, North Carolina. There he will come face to face with old demons, forge new friendships, and make enemies far more dangerous than those who ruined his face, all in a quest to save the granddaughter he’s never met...and maybe find a little bit of redemption along the way.

Ugly As Sin is an electrifying tale of “white-trash noir,” a taut page-turner that skates the razor edge of a familiar, horrifying reality. At times heartbreaking, funny, and terrifyingly suspenseful, Ugly As Sin is Newman’s best work to date.
An enjoyable tale of family, loss, mistakes and regrets with an unexpected opportunity to make amends and in some ways find some forgiveness of self. All wrapped round a wrestling backdrop and the search for a missing granddaughter.
It's fairly brutal and graphically violent at the start, as Nick Bullman aka The Widowmaker is attacked and had his face removed. The book soon settles down and charts Nick's quest and journey to becoming a better person and father.
I enjoyed it. I liked the set up and how the story evolved. I liked how Nick reconnected with his estranged daughter. I enjoyed the friendship he carved out with his wino, loner, biggest fan and the respect he gained from the local cop. I enjoyed watching his development and improvement and his increasing appreciation of his own self-worth as he made peace with himself; and I liked his taking names and kicking ass approach as and when the story merited it.