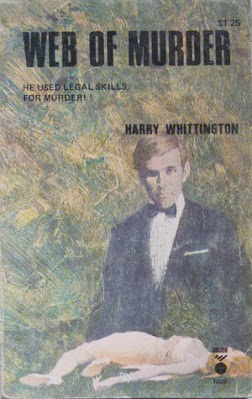 "She'd be better off dead!" Laura cried. "She's too rich, she's too fat. She chews her bank account as a cow chews its cud!"

I stared at Laura for a long moment. "Yes," I said slowly, "you're right - she would be better off dead. And you and I will see to it that she is."

Laura moved toward me. "Then, all that money will be ours ..."

An unhappy marriage, a man with a wandering eye and a rich wife, one who won't give him a divorce and ergo a cunning plan. Some people when they want it, they aim big and want it all...... career, money and the gorgeous girl.

Web of Murder is a well regarded noir of the late 50s and one which I've had on the pile for upwards of 10 years. Short and sharp and not overly racey as befits novels of the time that were still subject to quite stringent censorship.

I quite liked it without ever feeling I was in the presence of literary greatness. It's a straightforward enough premise and without spoiling things for possible future readers, things do not exactly follow the plan intended by our main character, Charley Brower and his floozy Laura.

Decent story with interesting characters, I was ambivalent as to whether Charley and girlfriend Laura triumphed. I didn't quite love them, didn't quite hate them, but wasn't a fan of the obstacle in their way either, Cora the wife. I was happy to ride the twists and turns and bumps that Whittington served up before a satisfying ending for this reader.

Whittington was prolific in his writing career, knocking out around 200 novels between 1950 and 1985, before his death in 1989. Web of Murder is the only one I have and while I'd probably pick more up if I ever crossed paths with them somewhere down the line (unlikely), I doubt I'll be actively seeking out the other 199.