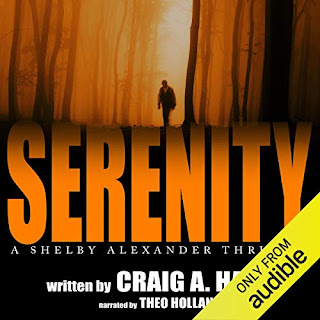 Hart is "one of today's master thriller writers. " - San Francisco Review of Books.

Shelby Alexander is an aging ex-boxer and retired fixer who moves back to the small town of his youth to settle down. He'd like to spend his golden years fishing the waters of Michigan. But you don't live life as Shelby has and not make more than a few enemies. Throughout this pulse-pounding series, Shelby faces enemies both old and new, relying on the skills he's learned over the years to stay alive and bring his own brand of vigilante justice to the bad guys. Full of blazing action, close calls, and memorable characters, the Shelby Alexander series is one you'll want to revisit again and again.

A bullet slams into a wall just past Shelby’s head. A drug dealer offers him $10,000 for information regarding his dead sister. The local sheriff has Shelby in his sights. It’s just another day in the small town of Serenity.

Another day, another Audible book and another one I enjoyed from another new-to-me author.

High art? High brow literature? No, but a story which entertained and provided a few thrills and had me interested in reading more this author.

Our main man, Shelby is a fixer and is hired to dig into the death of a woman who just happens to be the sister of a local king-pin drug dealer. The local law aren't interested. Our drug dealer soon winds up dead himself and Shelby is somehow getting targeted himself by an unknown assailant. His enquiries continue.

Hard to put the finger exactly on what I liked about this one, but I'll have a go.

Likable main character, interesting family dynamic, he's a divorcee with a grown up daughter who wants him to reconcile with her mum, only he has a girlfriend his daughter's age. There's criminality and drug dealing and bad eggs aplenty and semi-indifference from the law. There's action, violence, danger, death, dastardly doings and a decent enough outcome. There's plenty of humour and wit present and a nice flow to things as the author gets us to the finish line in a reasonable but not breakneck pace.

If Dickens and Austen and Eliot and Hemingway = gourmet dining. I'm probably more a fast food merchant myself. Craig Hart's work probably won't be to everyone's taste, but he puts a lot of ticks in the boxes for me.

Serenity is the first in a six or seven book series. I'll be looking forward to devouring more of them in the future.