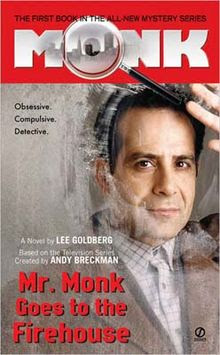 Monk's house is being fumigated, and he has nowhere to go. Fortunately, his assistant Natalie and her daughter are kind enough to welcome him into their home. Unfortunately, their home is not quite up to Monk's standards of cleanliness and order.

But while Monk attempts to arrange his surroundings just so, something else needs to be put straight. The death of a dog at the local firehouse-on the same night as a fatal house fire-has led Monk into a puzzling mystery. And much to his horror, he's going to have to dig through a lot of dirt to find the answer.

Well I enjoyed the TV series back in the day and I've previously enjoyed some of Lee Goldberg's books, especially the collaborations with Janet Evanovich, so the likelihood was that I was going to enjoy this. Correct.

A bit of a trip down memory lane then as Goldberg, a writer on the TV show captures Mr. Monk and his OCD, his quirks and obsessions and foibles perfectly.

Our mystery centres around a murdered Firehouse dog, which expands into the homicide of an old women in a house fire. Monk explains early on who did it and why - the culprit is the same in both cases. The rest of the book is spent trying to prove it, with the cocky killer further covering his tracks as we go.

Best book ever? No, but I did enjoy time in the company of Monk, his assistant Natalie (our narrator), her daughter and the couple of cops - Leland Stottlemeyer and Randy Disher - they work closely with. No real laugh out loud funny moments a la Carl Hiaasen, but plenty of wry wit and smiles.

A decent mystery, enjoyable characters, no break-neck pace, a sedentary unwinding of events and an eventual resolution to the tale, with a further twist regarding a murderer somewhat closer to home. This one is less action driven and violent than my usual reading, which made for a decent change.

There's enough time here to allow Natalie to go dating and pursue a romance. We see the bonds of friendship between Monk, Natalie and the two cops and also get to glimpse Monk's unresolved pain. It's the one case he has never been able to solve - the murder of his late wife. 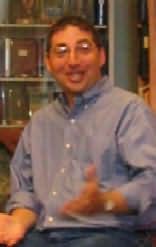 I have some more of Goldberg's Mr. Monk books on the pile. I won't be picking another one up immediately, but I'll get back to them one day.

Lee Goldberg's McGrave has been enjoyed before.