I don't read enough female authors. This is something I'm aware of and trying to address, albeit I'm rather hit and miss with my approach. This pair from Linda Barnes look good and wouldn't be a bad place to start. 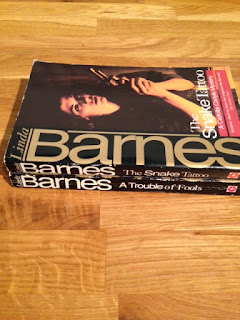 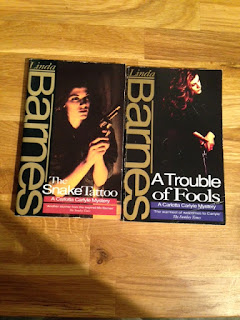 Linda Barnes has written over a dozen Carlotta Carlyle series books.
I doubt I will read all of them, these two at least.

Her other works include a four book series featuring Michael Spraggue, which predates the Carlyle series and a standalone novel called The Perfect Ghost.

Introducing Carlotta Carlyle, an ex-cop dismissed for insubordination, a sometime Boston cabbie and a committed volley-ball player down the YWCA, who sets herself up as a private eye and nose-dives into trouble. At six foot one with flame-red hair and no time for authority, Carlotta scares most men off; the ones that remain tend to be either cops or Mafiosi, neither of whom are famed for their commitment to women's liberation.

So, going it alone with a very light case load, Carlotta accepts old Margaret Devens' request to find her brother, a Boston Irish cab driver whose suspect connections make the case very much more dangerous than could be expected.

Find the woman with the snake tattoo.

A hooker, she'd witnessed the barroom fight that had ended with one man in a come and Lieutenant Mooney of the Boston Police Department suspended from duty.

Carlotta Carlyle owed it to her long-time friend and mentor, Mooney. Then there was the second job: a poor little rich runaway who'd gone for a walk on the wild side. Which was why Carlotta was cruising the red light district by night, and by day prowling round a very expensive private school with a reputation to protect.

Twi can-of-worms jobs for a private ye who, like anyone with the builders in, was fleeing the chaos at home.

"Sensitive, gutsy Carlotta is the swordarm of feminism, the girl for the Nineties."
The Observer