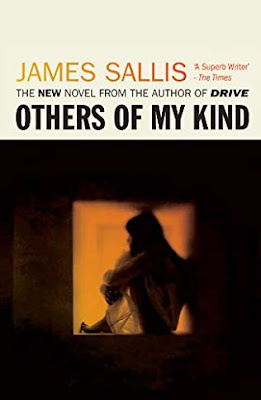 At age eight, Jenny Rowan was abducted and kept for two years in a box beneath her captor's bed. Eventually she escaped and, after living for eighteen months on cast-offs at the local mall, was put into the child-care system. Suing for emancipation, at age sixteen she became a legal adult. Nowadays she works as a production editor for the local public TV station, and is one of the world's good people.

One evening she returns home to find a detective waiting for her. Though her records are sealed, he somehow knows her story. He asks if she can help with a young woman who, like her many years before, has been abducted and traumatized. Initially hesitant, Jenny decides to get involved, reviving buried memories and setting in motion an unexpected chain of events.

As brilliantly spare and compact as are all of James Sallis's novels, Others of My Kind stands apart for its female protagonist. Set in a near future of political turmoil, it is a story of how we overcome, how we shape ourselves by what happens to us, and of how the human spirit, whatever horrors it undergoes, will not be put down.

'The thriller writer's thriller writer. His prose is intense... his stories so dark they almost inflict pain, and his sense of place exact' - Daily Mail

My first time reading James Sallis in about a decade, I reckon and whilst it wasn't the best book ever there was enough to have me wanting to read him again a bit sooner next time.

No real plot as such. An adult women was abducted as a child, escaped, lived for a period as a scavenger in a shopping mall, before being helped by the authorities and the system, and has now integrated back into society. She works as a TV news editor, is amazing at her job, but is quite solitary and has no real friends.

We get snippets of her back story and in the present we see her reluctant involvement in helping another abducted and freed woman come to terms with her situation. Fast forward, she traces her real parents and somewhat unbelievably reaches out to a powerful politician - either a Vice President, wife of a dead President, or Presidential candidate soon to become President - when her son is abducted.

I enjoyed time in our main character's company. I liked the bond she developed with Jack, the detective who asked for help. I liked the connection with her new charge, Cheryl and her relationships with the people around her at work, albeit she conceals her true identity and past from them until her cover is blown at least.

In some respects her character was a bit too perfect. She is totally bereft of anger, rancour, bitterness, jealousy, greed or another other negative human trait. She kind of makes Mother Theresa look like a bad egg. She brings food parcels to the local squat and engages with them all. She meets her abductor on his death bed and fulfils his dying wish.

I kind of get her, in regards to acceptance of her past and taking the positives from her experience. She felt loved and cared for and has an continued emotional attachment that persists through the book with her abductor, but me I'd be full of poison after such an experience.

Lots of great writing and profundity expressed by Sallis throughout the book, which sadly because I have screwed up my Kindle I was unable to highlight and now recall. But there was plenty there to give me pause and reflect on.

A bit of a weird one overall. I'm sure James Sallis is conveying a message of ..... what? hope, time healing, move on, etc etc. who knows? I suppose those are the positives I take from it, albeit with a certain pinch of salt as he stretched the bounds of believe-ability more than once.