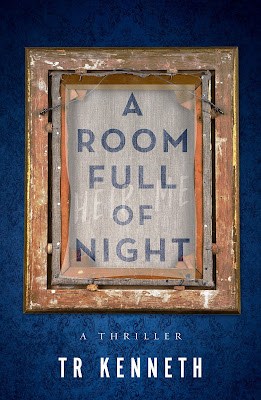 Perfect for fans of Robert Harris’s Munich and The Fatherland

Stag Maguire, a burnt-out journalist hardly able to prop himself up in the wake of tragedy, agrees to help a friend move. They find an urgent message—HELP ME—written on a piece of silk tacked behind a long-forgotten portrait. The message from an address in Berlin is urgent; though it had to have been written pre-World War II. Curious, Stag and his friend begin to research the address and whomever might have written the message. They trace the address to an apartment, a sealed time capsule that has not been lived in since 1942. And from one phone call to that apartment, the men unleash a nefarious plot and brutal security forces long thought vanquished. Events begin to cascade without mercy, and Stag—a broken man from the Midwest—finds himself pitted against a vestige of the Third Reich with powerful forces ensuring the propagation of Heydrich’s infamous SD—Nazi’s intelligence agency—in today’s world. Will ordinary-man Stag Maguire prevail in his lone stand against evil?

A book I enjoyed a bit more than I initially thought I was going to, not least because it imparted a bit of knowledge about Reinhard Heydrich, one of the architect's of the Nazi's Final Solution, the SD, Interpol (did you know one of the presidents of the organisation in the late 60s, early 70s was a former ranking SS officer?) and war time fears about Germany's attempts to develop the bomb. I'll confess to some ignorance at worst, or memory loss at best and say I don't think I have previously heard of Heydrich.

Our story starts in the US with the present day discovery of a message in a painting, linked to a Berlin flat which was the war-time apartment of Heydrich and his mistress, faithfully maintained in lock down by a powerful and secretive organisation.

Long story short - the organisation preserve the flat under instructions from it's former occupant in the belief that it holds clues to Heydrich's secrets. ie that Heydrich had managed to develop some form of nuclear bomb and had squirrelled it away somewhere in the Alps. This organisation wants to possess the bomb, then sell the device to the highest bidder, as opposed to establishing itself as some form of Fourth Reich.

Stag Maguire, a crippled journalist who lost his pregnant wife in a shooting, trips our baddies radar with his enquiries about the flat. The almost instantaneous death of his friend grabs his attention and sets in motion a one little man against the powerful machine type thriller. What does Maguire know that they don't, how can they find it out, when can they kill him and get their hands on the prize?

The plot sounds almost too fantastic to provide a credible thriller, but I really enjoyed the book. Maguire is an unlikely hero (aren't they all?)....... grieving, relatively few friends and at a loose end and now angry and irritated beyond belief that his friend has been killed. The organisation he is pitted against has unlimited resources, dealing in security and secrets.

The book is quite a quick read, it's fast-paced and I enjoyed seeing Maguire pit his wits against his adversaries. I enjoyed the slow piecing together of clues via a coded book from the flat, the cat and mouse game with enemy; and not least the information offered by the author, regarding Nazi resistance and U-Boats (Jews hiding in plain sight as non-Jews), the hierarchy of the Nazis and Heydrich's role in the war, prior to his assassination in Prague in 1942.

There is plenty of tension at play, as Maguire tries to figure out whether he can trust anyone. There's a femme fatale involved - playing both sides or just playing Stag?, and the involvement of official security services anxious and curious about this secretive rogue organisation and their motives concerning Heydrich's dirty bomb - should it prove to exist. Maguire still isn't sure about whether he's on his own or has allies.

There's doses of humour present, so it's not all doom and gloom. Maguire is quite droll and some of the exchanges with the head of his nemesis are amusing. There's also a lot of fun to be had when the various rivalries in the organisation are explored.

There's a slight suspension of disbelief required during the last bit of the book, once things start ramping up, but I had been thoroughly engrossed and entertained up to that point so was happy to go wherever the author took things.

Overall very good - entertained and a little bit more knowledgeable for the reading of it.

A Room Full of Night is T.R. Kenneth's debut thriller.