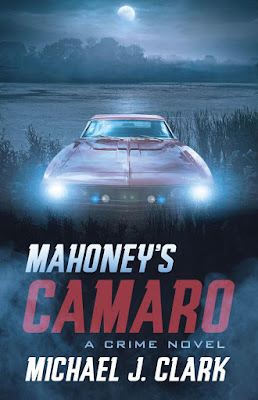 Racing to find a killer before he strikes again, an unlikely investigator is haunted by an even more unlikely source in this gripping crime novel.

It's the summer of 1985 and mechanic Steve Mahoney is dreaming big about owning his own shop. He's getting there as slowly as possible, working one night shift at a time for a local towing company. One night, called to retrieve a car from the murky Red River, Mahoney finds the replacement body to his prized but damaged '67 Camaro. There's also a body inside the car, handcuffed to the steering wheel. Mahoney's able to snap the Camaro up cheap at a salvage auction, but once he's restored the car to its former glory, he discovers that its last driver is standard spectral equipment on his new ride, and she's not leaving until she finds out who sent her to a watery grave.

Mahoney's Camaro is a gritty, fast-paced crime novel that will appeal to fans of Ron Corbett and Stuart MacBride. Combining expertise in the automotive world and a passion for storytelling, Michael J. Clark delivers an action-packed joyride that will grip you until the last page.

An enjoyable book, some crime fiction with a supernatural twist in the form of a couple of ghosts - mainly one - somewhat reluctant to depart this mortal coil; at least until someone has paid the price for causing their death. Usually, I'm not a massive fan of unexplainable, otherworldly type influences in my reading, but here I was happy to go with the flow.

Our main man is a graveyard shift, tow truck driver Steve Mahoney who is also a straight Joe, refusing to deal in drugs or girls, which form part of the seamier side of his employer's business.

Mahoney gets the call to fish a Camaro out of the river. Long story short, he acquires the car for himself and comes to the attention of the group who killed the woman in the vehicle and wanted the car for themselves to dispose of any evidence linking them to the body and whatever they had been cooking up with the book-keeping corpse when she was alive.

It's an interesting set-up. Mahoney has his car complete with spectral presence that won't leave, but who doesn't know what happened to her. In alternate parts of the narrative, we are in the company of the crims and we know who did her down and why.

Mahoney, his girlfriend and his car-crazy boys and the ghost of the dead woman try and solve her murder mystery - the cops seem to believe it's a suicide, while the opposition scheme away - new drug deals, smuggling, covering of tracks with attempted murder, double crossing each other, acquiring, selling and re-acquiring leases on roof top properties in preparation for making a killing when cell phones networks roll out across Canada.

Good fun, a bit of sex, plenty of humour and banter amongst Mahoney and his friends, lots of villainous scheming and plotting and an outcome that worked. There's a lot of love and detail for old cars and bodywork and engines, I think the author's a bit of a petrol-head. Most of it went over my head, but there wasn't so much that it felt like reading an engineer's manual.

I enjoyed the book. I liked the Canadian setting - Winnipeg and the time frame of the mid-80s, which Clark captured through the music Steve listened to. The plot was okay. The tale didn't have too many twists as the reader had an overview of what was going on. The characters were entertaining and I was invested in the outcome without ever being blown away by the quality or quirkiness of the writing. Probably not one that will live too long in the memory, but not one to regret reading either.

Michael J. Clark has another book - Clean Sweep - to his name, which I'll hopefully read at some point.