Any wish fulfilled for the right price.

That's the promise the organization behind The Desire Card gives to its elite clients - but sometimes the price may be more menacing than anyone could ever imagine.

Harrison Stockton has lived an adult life of privilege and excess: a high-powered job on Wall Street fuels his fondness for alcohol and pills at the expense of a family he has no time for. Quite suddenly all of this comes crashing to a halt when he loses his job and at the same time discovers he almost certainly has only months left to live.

Desperate, and with seemingly nowhere else left to turn, Harrison activates his Desire Card. What follows is a gritty and gripping quest that takes him from New York City to the slums of Mumbai and forces him to take chances, and make decisions, he never thought he’d ever have to face. When his moral descent threatens his wife and children, Harrison must decide whether to save himself at any cost, or do what’s right and break his bargain with the mysterious group behind The Desire Card.

The Desire Card is a taut fast-paced thriller, from internationally acclaimed author Lee Matthew Goldberg, that explores what a man will do to survive when money isn’t always enough to get everything he desires.

Best book ever? No, but lots for me to enjoy here, despite the book being populated by hugely unlikable individuals, ranging from our main character - the self-absorbed Harrison Stockton to his annoying wife, irritating children, arsehole father-in-law, slimy former work colleagues and shifty former best friend, Nagesh. There's only one individual in the book that you'd be happy spending time in the company of  - an escort, Naelle - and not just because she rents out her body for money.

Despite the lack of sympathetic characters, Goldberg has written a compelling book. Stockton is an alcoholic, he's just lost his job, his marriage is failing as is his health. A collapse in the arms of Naelle, precipitates a hospital visit and a long overdue check-up. He's dying and in urgent need of a liver transplant.

Ill-health, alcoholism, unemployment, relationship issues, old friendships resurrected, history of a friendship and a marriage, family, secrets, black market organ harvesting, Mumbai misery, greed, a scam, an unlikely ace in the hole - The Desire Card - wish fulfilment guaranteed - if you're prepared to pay the price. How much for a new liver? And who pays?

Stockton has a crappy hand dealt to him, but it's hard to sympathise with his predicament as the majority of it is self-inflicted caused by his alcohol consumption. There's a major turning point in the book, when he has a difficult choice to make, one which shows him to be more than a hedonistic, vacuous vessel. A simpler, happier life - still truncated - beckons, assuming his nemesis, the power behind The Desire Card permits it.

Its a difficult read in places, especially when exposed to the realities of the impoverished in Mumbai. There are some graphic illustrations of living conditions, with a stomach churning lack of sanitation, nourishment, shelter, health and most damning of all - hope. Its in sharp contrast to the New York lifestyles of the successful bankers and the privileged elite that are encountered in the book. It's an imbalanced world for sure.

An interesting theme, thought provoking in its contrasts and with a moral dilemna for a main character that kind of grows on you as the book and his story unfolds. 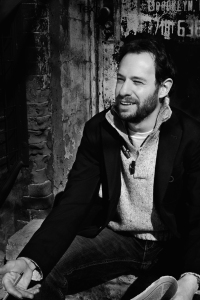 Goldberg has a second offering in The Desire Card series out later this year. I'd be curious to see where he goes next.

I've read Lee Matthew Goldberg previously, albeit in a shorter format.
De/tached was read back in 2015