A couple from Robert Daley, that I've had on the shelves for more than 10 years, probably 20 and not yet got around to reading. 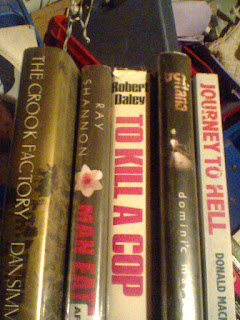 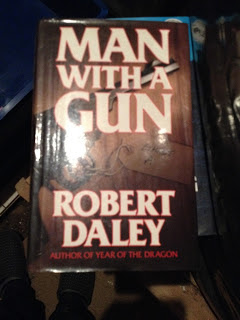 Robert Daley has written over 20 novels in a career that so far spans from 1959 and The World Beneath the City to The Red Squad in 2013, plus a host of non-fiction. A lot of his books concern the police, probably unsurprising seeing as he served as NYPD deputy commissioner in the early 70s
.


To Kill a Cop also spawned a TV movie of the same name, followed by a short-lived TV series, Eisheid in the late 70s.

I wonder if it will take me another 20 years to get around to finally reading them?
Hopefully not. Reactions and reviews are subjective but over on Goodreads, To Kill a Cop has an average score of 3.76 (7.5/10) from over 40 readers. Man With a Gun - similar - averaging 3.67 from 39 readers. What am I  waiting for? 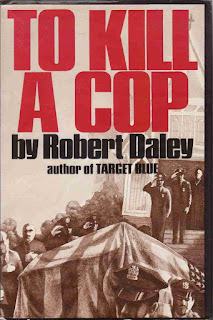 
The assassination of two patrolmen has the tired, corrupt and cunning NYC Chief of Detectives Earl Eisheid scrambling not just to find the killers but to save his own career. The assassins are from a group called FEAR--the Freedom and Equality Revolution. Their dream is to make Chief Eisheid's worst nightmare come true. 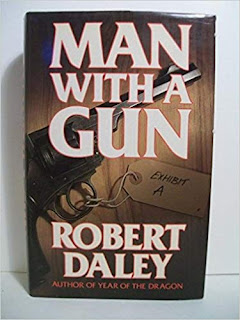 Publisher's Weekly
This latest novel by the author of Prince of the City may end by focusing on the controversy over a green Deputy Commissioner who commits accidental homicide, but it is really about the fascinating distribution and realignment of power at the top of the nation's largest police force. Foreign correspondent Phil Keefe has been selected right-hand man to New York Police Commissioner Timothy J. Egan, a small, strong-minded former police academy instructor bent on reform of the department. Keefe is coached by a sergeant who has seen awful cruelties on the streets of New York. He is suspected by top brass who fear their power slipping into his hands. And he is resented by his girlfriend, an actress whom he leaves each night to visit the city's cops at work. He is in over his head, though, when police officials saddle him with a difficult hostage negotiation that results in the death of a distraught black trucker. Daley himself is on slightly unfamiliar ground when he brings to task an ambitious senator and assistant DA. And he sometimes pushes too far his recurring theme of the cop as society's martyr. But when Daley describes working cops, he makes clear the aggravation and ugliness of their jobs. And when he examines the methods by which major police officials quietly protect their careers and extend their grasp, he writes like a dazzling pre-glasnost Kremlinologist scrutinizing small changes in photos of Soviet leaders for revealing clues.
Posted by col2910 at 22:55