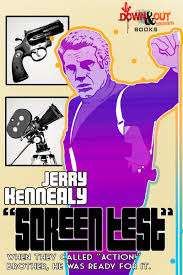 In April of 1968 Steve McQueen arrives in San Francisco to film Bullitt.

Rough-and-tumble SFPD Inspector Johnny O’Rorke, aka The Fixer, is the department’s Executive Protection Officer. His job is to make sure that visiting celebrities are well taken care of. O’Rorke is instructed to take special care of McQueen; the city’s movers and shakers are hoping to develop San Francisco into Hollywood North.

McQueen takes a liking to O’Rorke, and when Russ Cortig, a member of his film crew, is busted at a wild Haight Ashbury party, he asks O’Rorke to try to have the charge dismissed.

Fixing Cortig’s arrest sheet is a minor problem, but it leads O’Rorke into a tangled web of intrigue and corruption that includes the murder of one of his longtime informers, a crossdresser who goes by the name of Vanessa the Undresser, tangling with a Chinatown drug lord, being shot at by a sadistic Soviet hit man, going up against a wealthy former Russian Mafia leader now living in San Francisco, dealing with a vicious local gangster, Alec Zek, aka The Swine, and a chasing after a priceless blue diamond known as the Stalin Blue.

If that isn’t complicated enough, O’Rorke breaks into a real sweat when McQueen asks him to make a screen test for a part in Bullitt.

“Steve McQueen. Bullitt. Transvestites. Murder. And the City by the Bay. Who could ask for more? Gear up for a rockin’ roller coaster ride up and down San Francisco’s tumultuous hills in Jerry Kennealy’s entertaining, triple-fast thriller Screen Test, but make sure to wear your seatbelt.”
—Paul D. Marks, Shamus Award-Winning Author of White Heat

An enjoyable, interesting and busy little book with lots going on throughout.

San Francisco, late 60s and our main man is Johnny O'Rorke. O'Rorke is a cop with his main brief  looking after celebrities visiting the city, the latest of which is Steve McQueen and the rest of the team filming Bullitt. O'Rorke solves a problem for one of the crew, suggests locations for shooting scenes, gaining favours along the way, and entertains many requests from fellow cops for moonlighting gigs as security or even as an extra in the McQueen flick. His nickname The Fixer is well deserved.

In addition to keeping McQueen and by definition his bosses happy, O'Rorke has a few more headaches to contend with. A deathbed confession by his ex-cop father's partner, alleging the murder, burial and robbery of a Chinese gangster by his father many years earlier, has an ambitious DA all excited and O'Rorke scrambling to react. In addition it puts O'Rorke in the cross-hairs of the deceased gangster's son and his Chinese syndicate.

Lastly, a vicious attack on a transgender working girl and one of O'Rorke's contacts by a possible Russian agent merits some investigation. Vanessa the Underdresser is subsequently murdered, making that priority number one.

O'Rorke's enquiries progress and one thing leads to another with the Russian angle increasingly coming into play, with competing Russian mob families, other Government agencies and police departments - we're in the middle of the Cold War where anyone or anything Russian merits scrutiny and an invaluable and highly coveted blue diamond, allegedly owned by Joseph Stalin. I do like books with more than one plot strand and author Kennealy gives us a few here to ponder.

I liked the backdrop of the film and the interaction between McQueen and O'Rorke throughout. (By coincidence I part-watched Bullitt only a year or so ago, before my recording device let me down. Kennealy has re-awakened my interest in digging out the purchased DVD to watch it again.)

I enjoyed the landscape of the book, with the city and its bars, restaurants and sleazy sex shops coming alive in Kennealy's hands. It's a different time and a different world...... favours traded, cops consorting with and cultivating criminal contacts, small bribes accepted, and a few more liberties taken in the pursuit of information and the questioning of suspects and cops alike.

One of the main attractions and highlights was the main character, Johnny O'Rorke. He's a decent cop and a dogged investigator, but not above bending and breaking the law to further his investigation and protect his family. He's someone I'd be interested in spending more time with in the future. That Kennealy has written a further book - Dirty Who? - with O'Rorke is a cause for celebration.

Decent plot, decent pace, lots of little off-shots and distractions, a bit of romance with O'Rorke's girlfriend involved throughout both socially and aiding his investigation with information gleaned from her job in the DA's office, decent resolution with an aftermath in London clearing up all the loose ends.

Jerry Kennealy has written over 20 novels, including 11 in his Nick Polo series. Screen Test was my first time reading him, but definitely not my last.