A couple from US journalist/columnist/newspaperman and author Carl Hiaasen this week. 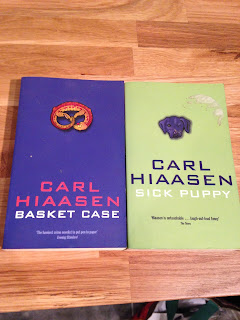 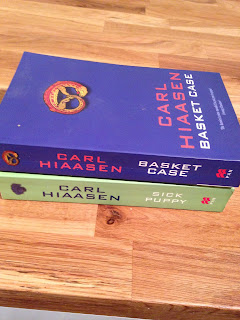 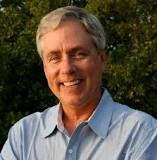 I can't remember exactly when I discovered Hiaasen's books - late 80s, early 90s - but the first I read from him years ago was Tourist Season and I can recall laughing like a drain throughout. It was one of those reads where I was really annoying my wife with my laughing. I think she ended up reading it to see exactly what tickled me so much. Double Whammy followed and I was hooked.

Over the years I carried on buying his books and for a long period of time subscribed to his weekly newspaper column at The Miami Herald. Anything he wrote, I wanted to read. Fiction, non-fiction, YA books. Gradually over time I disconnected from his work.

The last one I read from him was Razor Girl and while it was enjoyable it didn't hit the heights for me of his earlier work. I still have loads on the pile from him to enjoy including copies of the first few I read from him which I've saved for a re-read.

He's written about 30 books in total now with a couple of series among them - Skink in particular is a standout character for me. I wonder if I can re-visit his earlier books and get that warm, fuzzy glow back that comes from falling in love with a fresh new author and his books.

His topics are recurring.... huge concerns over environmental issues and political corruption laced with humour, satire, thrills, absurdity in a Florida setting, ....well worth a look in my opinion. 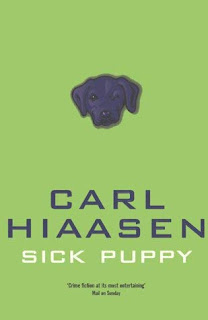 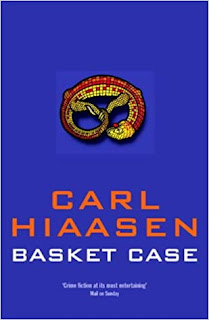 Jack Tagger is a frustrated journalist. His outspoken views have relegated him to the obituary page,
with his byline never again to disgrace the front page. But Jack has stumbled across a whale of a story that might just resurrect his career... James Stomarti, infamous frontman of rock band Jimmy and the Slut Puppies, has died in a diving accident and Jack harbours suspicions that the glamorous pop starlet widow may have had a vested interest in her husband's untimely death. It all smells a little too fishy. Aided and abetted by his rather sexy (if unnervingly ambitious) young editor, Emma, Jack sets out to in pursuit of the truth - and a nice juicy story. But of course nothing is ever straightforward and with murderous goons on his tail, brutal internal politics at the paper and a paranoia about death, Jack is struggling to keep his head above water. Was Jimmy Stomarti murdered? Is someone trying to kill off the Slut Puppies one by one? And what significance can a dead lizard named Colonel Tom possibly have? Basket Case is an absolute delight from first page to last and spells out a hilariously hard-won triumph for muckraking journalism. This is one book you'll kill to get your hands on.