Another decent month's viewing with a trip to the cinema, the completion of a 6 part TV drama and the odd TV film or two.

I don't think Adam Sandler is everyone's cup of tea, but ever since The Wedding Singer and Fifty First Dates I've always been partial to watching his films, though that doesn't extend to buying them or rushing straight out to the cinema either. (Do his films even go on general release now?)

Typical Sandler fare here - some hit and miss jokes, a bit of juvenile schoolboy humour-cum-crudity and a bit of heart! He's done worse but he's done better - maybe a 6 or 7 from 10.

Two down-on-their-luck guys decide to fake their own deaths and start over with new identities, only to find the people they're pretending to be are in even deeper trouble.

The trials and tribulations of a parish priest with some awkward customers, sorry...... parishioners requiring spiritual succour and some practical support. Compulsive gambling, suicide, mental illness, death by police, institutional cover-ups, poverty - life on the breadline as a single mother with 3 kids and a family bereavement, homosexuality and intolerant attitudes. My first real time in the company of Sean Bean as an actor and he's pretty amazing in his portrayal. Unlike some of Jimmy McGovern's programmes, I left this series feeling quite uplighted.

Broken is a six-part British television drama series, created by screenwriter Jimmy McGovern, that first broadcast on BBC One on 30 May 2017. The series focuses on Michael Kerrigan (Sean Bean), the priest of a Roman Catholic parish in a northern English city, who despite suffering from his own troubles stemming from a traumatic childhood, tries to guide several of his most vulnerable parishioners through the trials and tribulations of everyday life. The series, produced by LA Productions, was commissioned in 2015; with filming taking place throughout 2016

My daughter insisted we watch this one and for once I was quite happy to accept her recommendation. Usually I have to sit through some trashy horror flick, watching through my fingers as my legs shoot out into the air, everytime something goes bump.

Apparently, I'm supposed to know who Blake Lively is. I didn't but I do now. A decent love story with an intriguing premise - a woman who has stopped aging. Harrison Ford has a decent contribution to make, as one of Adaline's former lovers and the father or her current one.

A young woman, born at the turn of the 20th century, is rendered ageless after an accident. After many solitary years, she meets a man who complicates the eternal life she has settled into.

A weekend trip to Lowestoft and a visit to their small but fantastic East Coast Cinema - no multiplex prices here. 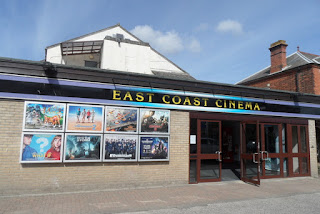 I'm not a massive fan of the "Apes" genre/saga but I enjoyed this one well enough. I do like a bit of Woody Harrelson and there's plenty of action and a reasonable plot here. It does feel slightly disloyal to be rooting for the apes over the humans, so I tried to sit on the fence!

Caesar (Andy Serkis) and his apes are forced into a deadly conflict with an army of humans led by a ruthless colonel (Woody Harrelson). After the apes suffer unimaginable losses, Caesar wrestles with his darker instincts and begins his own mythic quest to avenge his kind. As the journey finally brings them face to face, Caesar and the colonel are pitted against each other in an epic battle that will determine the fate of both of their species and the future of the planet.
Another winner from my daughter - she's on a roll now 2 from 2! We have seen this one before but well worth a second look. Funny, sad, thought provoking and humorous. Paul Rudd, Selena Gomez and Craig Roberts are all excellent.

A writer (Paul Rudd) retires after a personal tragedy and becomes a disabled teen's caregiver. When the two embark on an impromptu road trip, their ability to cope is tested as they start to understand the importance of hope and friendship.

Tense drama - late 80s New York, a nightclub owner Joaquin Phoenix taking a different path to his cop family - brother Mark Wahlberg and father Robert Duvall. Eva Mendes is pretty good as Phoenix's girlfriend. Powerful stuff. I usually like all four of these actor's films and this was no exception.

In 1988, New York's police wage an all-out war on drugs, and guilty and innocent alike become casualties. Bobby Green (Joaquin Phoenix), manager of a nightclub that is often frequented by gangsters, tries to remain neutral but hides a potentially fatal secret: His brother (Mark Wahlberg) and father (Robert Duvall) are both cops. After his brother is wounded in an assassination attempt, Bobby can no longer remain neutral. He joins forces with his brother for an all-out assault on the mob.


My other daughter spotted this one on one of our TV channels so we dipped in and had a look. Two episodes so far and we're enjoying it. Probably complete tosh and nonsense or maybe not - the science of predicting jury behaviour. I like Michael Weatherly though his character doesn't seem that far removed from the one he played in NCIS - Anthony DiNozzo - another series we used to enjoy.


Bull is an American drama television series starring Michael Weatherly. CBS ordered the program to series on May 13, 2016, and it premiered on September 20, 2016. The show is based on the early days of talk show host Dr. Phil McGraw's career, when he was a trial consultant. (from Wikepdia)

I do like Peter Mullan as an actor - Sunshine on Leith, Neds, Ordinary Decent Criminal and probably lots more beside. I really enjoyed this film also.

Mullan plays Hector, one of the many invisible homeless on our streets that we choose not to see every day. Sad and serious, with a bit of humour and camaraderie on display. Both facets which elevate this one above being a potentially grim and harrowing view, into something much more watchable without ever losing sight of the seriousness of the subject.

Hector has been living on the motorways for years. His once comfortable family life has been replaced by a never-ending tour of service stations that offer him shelter, anonymity, washing facilities and food. The story follows his journey south from Scotland on his annual pilgrimage to a temporary Christmas shelter in London where he finds comfort, friendship and warmth. Over the course of his Homeric journey, Hector decides to reconnect with his long estranged past. As his previous life catches up with him, the story of how he came to be leading a marginal life begins to emerge.
Posted by col2910 at 23:04