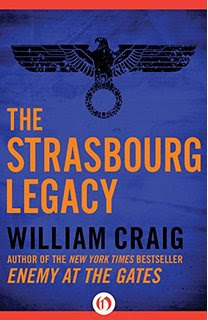 Decades after the defeat of the Third Reich, the SS rears its sinister head in this captivating thriller from the bestselling author of Enemy at the Gates and The Fall of Japan

In the chaos of defeat, while Germany's roads teemed with desperate refugees and jumbled armies, Hitler's inner circle tried to disappear. Heinrich Himmler donned an eye patch and posed as a farmer. Captured by British troops, he bit into a cyanide capsule concealed in a tooth cavity. Rudolph Hoess, former commandant of Auschwitz, was discovered working as a farmhand near Bremen. But many of the most notorious Nazis escaped, including Josef Mengele and Adolf Eichmann. Martin Bormann, the Fuehrer's private secretary, was rumored to be living everywhere from the Soviet Union to South America.

Almost 3 decades later, CIA agent Matt Corcoran is sent to Bad Nauheim to investigate possible Soviet involvement in the theft of US Army munitions. He hears whispers of German Reds blowing up NATO ammo dumps, neo-Nazis aiding the Arab cause against Israel, and a plot to assassinate the German chancellor. Corcoran soon begins to suspect that behind the turmoil is an organization as diabolical as it is improbable: a cadre of loyal Nazi officers, under the command of Bormann, who are bent on bringing about the Fourth Reich.

As action-packed and suspenseful as The Odessa File and The Boys from Brazil, The Strasbourg Legacy is 1st-class entertainment from an acclaimed historian of World War II.

A Net Galley book and an interesting enough thriller with Espionage undertones, without being the best book ever.

It is the mid-70s and some sleeper Nazis have decided the time is right to overthrow Willy Brandt’s government and instigate the Fourth Reich. Plans that have been 30-plus years in the making.  Matt Corcoran is the American agent, trying to join all the dots up and with the assistance of an adversary-cum-friend in Russian intelligence thwart the plan – once of course he has realised what is going on.
There’s misinformation and red herrings aplenty – why are the Russian’s ramping up the Cold War with troop movements towards the West? Is it Baader-Meinhof Gang raiding American arms depots in Germany? Why now are the Arabs instigating an oil-shortage which could cripple an Allied response to Russian aggression, or is it all part of a bigger smokescreen?

Interesting plot, though I don’t know too much about the time period to offer a considered response as to whether it was all plausible, though the author does a convincing job in persuading me. Could the Nazis have made a comeback? Would the civilised world have tolerated them?

Not too much depth to our characters, which in this instance was quite good because it kept things hurrying along. Enough there to ensure the main characters were more than brush-strokes but insufficient to allow for any feelings of fellowship from this reader, for the good guys. That said, only brush strokes or not – who doesn’t find Fascism and Nazis odious.

Overall a fairly quick read in a month where my reading has slowed up. Interesting and a bit of food for thought on a “what if” basis, but I wouldn’t especially rush to read anything else by the author.

Accessed via Net Galley and available from Open Road Media.

William Craig was a US author and historian with a couple of books on World War II, as well as the 1971 fictional offering The Tashkent Crisis. He passed in 1997.