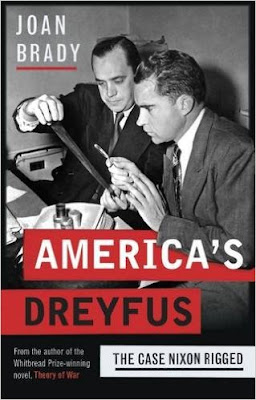 “This is an extraordinary book...it shows clearly that Alger Hiss was wrongly convicted. Even more, it is a case study in how the progressive experience of the New Deal was wiped out by hysterical anti-communism. So much for the rule of law. And now it's happening again.”

CLARE SHORT, Secretary of State for International Development in the government of Prime Minister Tony Blair 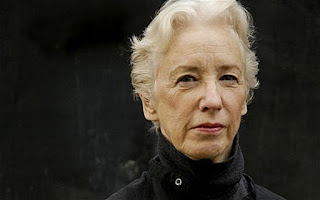 JOAN BRADY is an award-winning author and the first woman to win the Whitbread Book of the Year Award (now known as the Costa Prize). America’s Dreyfus: The Case Nixon Rigged will be released on the 10th September 2015 (hardback, £20.00) and is the culmination of Joan’s decade-long fascination and extensive research into the infamous case of Alger Hiss.


Every American child learns about the crimes of Alger Hiss; in school textbooks, it’s a name that rings with villainy: Communist, traitor, spy. Outside the US, he’s less well-known, but the man who brought him down was Richard Nixon, notorious all over the West for his own crimes in government. Joan Brady’s powerful book demolishes the case against Hiss and shows how Nixon manipulated the press and the public with lies of staggering proportions and evidence conjured from nowhere.

Brady met Hiss after he got out of prison, knew him for many years, but never looked hard at what had happened to him until she was prosecuted herself. Why would Nixon rig a case like this? America’s Dreyfus explores the anti-Communist hysteria ruling the US post World War II and reveals how Nixon exploited it ruthlessly and with extraordinary success. All waves of hysteria need scapegoats. Nixon made Hiss into Communism’s, much as in 1894 the French military turned Alfred Dreyfus into a focus for French anti-Semitism. Nixon’s scapegoat set him on the road to the White House and put Hiss in prison. Dreyfus was eventually cleared of his crimes; now it’s Alger Hiss’s turn.

Intercut with her own personal reminiscences of Alger Hiss and alternating the facts and fictions surrounding his downfall, Joan draws strong parallels with what is happening in world politics today. Written in a vivid and personal style, America’s Dreyfus reads like one of Brady’s thrillers. But every word is true.

Joan Brady lives in Oxford but was born in California and danced with the New York City Ballet in her twenties, a story she tells in her highly-acclaimed autobiography The Unmaking of a Dancer. She won the Whitbread Book of the Year Award for her novel, Theory of War; the first woman, and American, to do so. The book also won France's Prix du Meilleur Livre Etranger. Long-listed for the Orange Prize with her novel Death Comes for Peter Pan, she turned to thriller writing in 2005, pouring rage and passion onto the page with terrifyingly results. Critically and commercially acclaimed, Joan’s thrillers include The Blue Death, Bleedout and Venom.

America’s Dreyfus: The Case Nixon Rigged by Joan Brady is published by Skyscraper Publications on the 10th September, price £20.00 hardback.

1. What was Nixon's middle name?

Answers via e-mail to col2910@gmail.com.

I like a bit of a dabble in non-fiction now and again - a bit of sports biography, a bit of topical social commentary or a bit of politics or war reporting. In my lifetime there have been two US Presidents that come across as a little bit interesting and worthy of further investigation. Bill Clinton was one - Tricky Dicky the other. I shall look forward to reading this one. 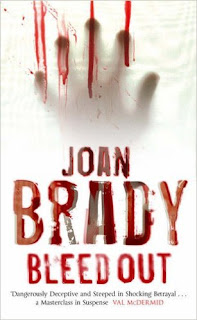 The second musing isn't going to portray me in a particularly favourable light. Once when book browsing, I picked up a copy of Bleedout, enticed by the cover, the spine and the blurb. I mistakenly read the author's name as John Brady. When I realised it was written by a Joan Brady I put it back!

Shameful really, rejecting a book I liked the look of on author gender only. I've always felt slightly guilty ever since.