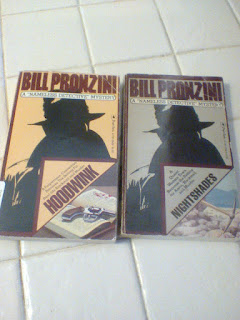 At a guess I could have selected any 2 from upwards of 50 Pronzini books on the shelves (or more accurately in the tubs).

If you’ve never heard of him, you’ve probably been living in a cave for the past 50-odd years. 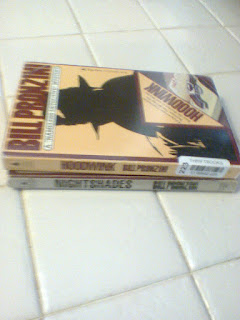 This is from the author details on Amazon…..

Bill Pronzini is simply one of the masters. He seems to have taken a crack at just about every genre: mysteries, noirish thrillers, historicals, locked-room mysteries, adventure novels, spy capers, men's action, westerns, and, of course, his masterful, long-running Nameless private detective series, now entering its fourth decade, with no signs of creative flagging. He's also ghosted several Brett Halliday short stories as Michael Shayne for Mike Shayne's Mystery Magazine, and has managed to collaborate with such fellow writers as John Lutz, Barry Wahlberg, Collin Wilcox and Marcia Muller. Still, if he never ventured into fiction writing, his non-fiction work, as both writer and editor, would still earn him a place in the P.I. genre's Hall of Fame. Besides his two tributes to some of the very worst in crime fiction (what he calls "alternative classics"), Gun in Cheek and Son of Gun in Cheek, and one on western fiction (entitled Six Gun in Cheek, naturally), he's the co-author (with Marcia Muller) of 1001 Midnights. The Mystery Writers of America have nominated him for Edgar Awards several times and his work has been translated into numerous languages and he's published in almost thirty countries. He was the very first president of the Private Eye Writers of America, and he's received three Shamus Awards from them, as well as its Lifetime Achievement Award in 1987. Despite reading in the genre for 20-plus years I have only been reading him since 2013 when I embarked on reading his Nameless detective series. My initial intention was to read one a month for 3 and a half years and get caught up.

I managed 5 books, in 5 months and was enjoying my journey before getting side-tracked.

My intention is to get back on track during the second half of 2015 and to stay on the horse. 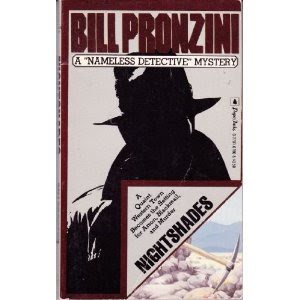 "Pronzini is a pro." - The New York Times

When Great Western Insurance hires the Nameless Detective to investigate an accidental death in a small northern California town, it looks like a routine case - one he expects to solve swiftly so he and his lady friend, Kerry Wade, can take a much needed vacation. But no such luck. Nameless lands in the middle of a violent conflict between a group of greedy land developers and the handful of citizens who inhabit an isolated Gold Rush ghost town. The triumverate of successful realtors plan to "renovate" Musket Creek (nee Ragged-Ass Gulch), and bring back its glory days as a Gold Rush boomtown - this time in the guise of a "theme-style" amusement park.

The town denizens have different ideas. Stark, desolate, crumbling - this is double-dealing, arson, and murder. It's a classic showdown - with death thrown in as the twist.

Labyrinth is number 6 and my next Pronzini-Nameless read.
Posted by col2910 at 00:10