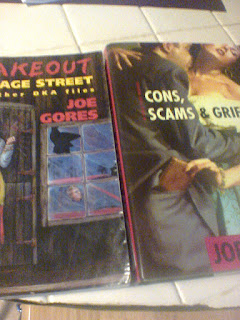 Joe Gores is one of those authors that sits in the tubs of the library, without having yet been enjoyed. His first book – A Time of Predators was published in 1969 and won the Edgar Award for Best First Novel.

He had 9 other standalone novels published as well as several collections of short stories, plus the DKA Files series of books. 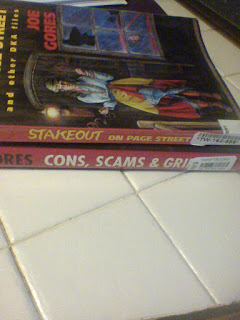 Dan Kearny and Associates is a 7 book series, comprising novels and a story collection featuring a car repossession agency. It has been described as being a PI version of Ed McBain’s 87th Street police procedurals. 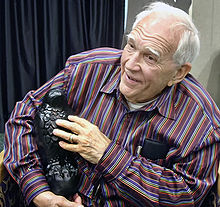 There's a nice piece on him at The Thrilling Detective website.

Stakeout on Page Street and other DKA files 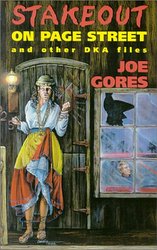 This collection of the complete shorter works (1967–89) featuring San Francisco's Daniel Kearny Agency, repo men (and women) extraordinaire, demonstrates convincingly how the whole can be greater than the sum of its parts. In fact, Gores's unusually detailed introduction and headnotes root both the twelve individual stories and the private-eye procedural genre they invented so firmly in the realities of his own work in skip-tracing and auto repossession that the first two tales seem barely fictionalized at all. But by the third story, with its briskly evoked carnival setting and its unexpected sympathy for the fleeing embezzler, Gores has hit his stride. Subsequent adventures of the DKA are all over the map. The perps range from a vengeful gypsy to a Dominican nun, the vehicles the agency's assigned to recover from a fire engine to a hearse, the moods from the trancelike calm of"Beyond the Shadow" (a puzzle story that pays off in a particularly handsome surprise) to the rollicking gaiety of"The O'Bannon Blarney File." Yet each one contrives to mingle vivid backgrounds, authentic procedural detail, the cleverness of the Kearny regulars-maverick Larry Ballard, ex-boxer Bart Heslip, eternally sozzled Patrick O'Bannon, brainy Giselle Marc-and soap-opera outtakes from the saga that's continued from Dead Skip (1972) through Contract Null and Void (1996), with another installment due later this year. Best of all, the DKA files remind you that one reason detective stories are so much fun to read is because detective work itself can be so much fun to do. 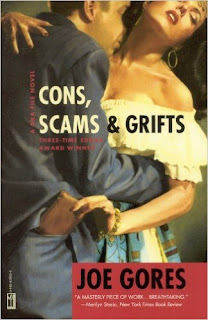 In San Francisco, Dan Kearny Associates raids a classic car dealership, while in Los Angeles, a dying Gypsy fingers a Gypsy princess for his murder. In Hong Kong, a rare treasure is stolen by oil tycoon Victor Hess, and in Rome, Willem Van de Post plots with a powerful ally to get it back. The intrigue continues when the Gypsies hire DKA to find their princess, and a German baron contracts the firm to test defenses at Hess' mountain fortress. No one is who they seem to be, but they all have one thing in common. They're all scamming their way to Rome, where a spectacular con is about to explode with deadly finality.