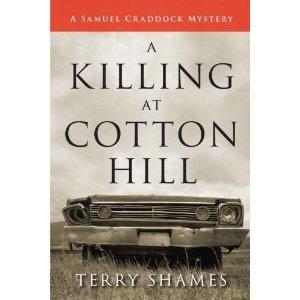 
The chief of police of Jarrett Creek, Texas, doubles as the town drunk. So when Dora Lee Parjeter is murdered, her old friend and former police chief Samuel Craddock steps in. He discovers that a lot of people had it in for Dora Lee. The conniving rascals on the farm next door want her land for nefarious purposes; her estranged daughter could be seeking vengeance; her grandson wants money for art school; and then there's that stranger Dora Lee claimed was spying on her. Does Craddock still have what it takes to find the killer? In this debut novel, the strong, compelling voice of Samuel Craddock illuminates the grandeur and loneliness of the central Texas landscape and reveals the human foibles of the residents in a small Texas town-their pettiness and generosity, their secret vices and true virtues.

I was browsing the internet about 5 or 6 weeks ago, hitting links to my usual crime fiction haunts and from there jumping to other sites, when I chanced upon a review of this as yet unreleased offering from Terry Shames. It’s a debut mystery from the author who grew up in Texas, but currently resides in Northern California. On the assumption that if you don’t ask you don’t get, I shamelessly requested a review copy; lo and behold a couple of weeks later a copy turned up.

As my reading over the past week or so, has hit a bit of a slump, I was hopeful that this small town mystery would ease some of the current gloom and get me out of my funk.  Well, I’m happy to report it did this and more.

Jarrett Creek is a small Texas town where everybody seems to know everybody else.  Samuel Craddock, widower and retired police chief is shocked by the murder of his friend, Dora Lee Parjeter. As well as shock, Samuel feels some responsibility as Dora Lee had been on the phone to him the night before worrying that there was a strange vehicle up the road from her farm and she felt vulnerable. Craddock had tried to placate his friend and brushed off her concerns.

When Craddock visits the scene of the crime, he exchanges a few words with the attending police officers before sneaking in to the scene of the crime. Dora’s artist grandson, Greg who had been staying with Dora in a shed-cum-artist studio located on her premises speaks with Samuel before being arrested by the police. Craddock’s successor Roddell believes he has the man responsible for the murder and Samuel convinced that Greg’s guilt is a little too convenient decides to get involved.

Craddock enlists the aid of Jenny Sandstone, lawyer and neighbour to spring Greg from jail. After speaking with the grandson at length and confirming his own beliefs that Greg isn’t responsible, but will be railroaded by Roddell. Craddock feels Dora Lee’s murder could be connected to the fears she expressed to him the previous evening and the stranger she felt was spying on her. Roddell’s incompetence and fondness of a drink to the detriment of his police duties is a further spur for Samuel to dig.

As Craddock’s inquiries continue, he crosses paths with her estranged daughter and extended family exploring the possibility that the murder could be related to the inheritance of Dora Lee’s estate and a potential land deal for a racetrack. With his investigation starting to ruffle a few feathers, Samuel falls victim to an arson attack on his property. Undeterred, our trusted ex-police chief doggedly pursues his enquiries to a satisfying conclusion.

Interesting and extremely enjoyable, in my opinion Terry Shames has crafted a wonderful piece of mystery fiction. In Samuel Craddock she has created an honest, likeable and intelligent character. Craddock is a widower and the depiction of his continued affection for his departed wife, Jenny and his on-going loyalty to her memory in how he conducts himself is heart-warming. Craddock decent, steady and blessed with humanity is someone I very much want to read more about in future.

Second to Craddock’s starring role is Shames’ portrayal of a small town in Texas which is totally convincing and believable. The supporting cast of grandson, daughter, friends, foes and assorted others are equally well developed and rounded, if perhaps slightly less interesting than Craddock.

My favourite book of the month so far and there’s no hesitation in giving it a 5 from 5. Hopefully it's blown away my reading blues!

As mentioned above I cadged a copy from the author. My thanks are due to both her and her publicist, Meghan. I believe the book is due for release 16th July. Check it out!