Week 12 on the 2013 Crime Fiction Alphabet and it’s the turn of the L’s both enjoyed and unread. Kerrie over at Mysteries in Paradise, very kindly collates all the offerings from other crime fiction bloggers and fans, so it’s worth heading over there to pick up some recommendations for your reading pile. 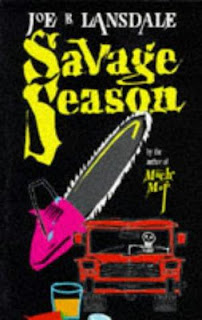 
One of my favourite series, though to be honest I haven’t dipped into it for a while and am somewhat hazy about which ones I have read and which I haven’t. Is it a crime to contradict yourself in the same sentence? Well anyway, Hap and Leonard, black, white, gay, straight, loyal, crazy, violent, humorous and fun. I intend to re-read this someday soon (by which I mean in a year or so) and blast through the series. Lansdale is one of those multi-genre authors. He crosses over into horror, fantasy as well as producing quality crime fiction. These are my favourites though.


Here comes Trudy back into Hap's life, thirty-six but looking ten years younger, with long blonde hair and legs that begin under her chin, and the kind of walk that'll make a man run his car off the road. Here comes trouble, says Leonard, and he's right. She was always trouble, but she had this laugh when she was happy in bed that could win Hap over every time. Trudy has a proposition: an easy two hundred thousand dollars, tax-free. It's just a simple matter of digging it up... Hap Collins and Leonard Pine, white and black, straight and gay, are the unlikeliest duo in crime fiction. Savage Season is their debut.


Herbert Lieberman – City Of The Dead 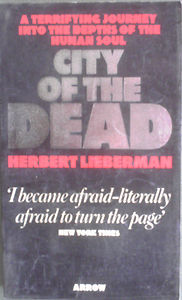 Lieberman was quite a big noise back in the 70’s and early 80’s. Still alive today he was last published around 1996 and has a total output of 11 books, several of which I have read. Not much of what I read in the 80’s has stayed with me to be honest, but I can recall being stunned by this superb novel. Bleak, haunting, scary and sad, I have kept hold of my copy over the years, ready to re-read at some point in the future. Highly recommended.


Paul Konig is Chief Medical Examiner, New York City. Each day's grisly workload of strangled whores, battered babies and dismemebered corpses is just routine to him. Contemptuous of the police, the public and his fellow-doctors, he presides over the morgue like a monarch. But things can go wrong, even for Konig. . . Not only has his daughter been kidnapped, he's up against a dead-end in the most gruesome multiple murder case of his career. And he's running out of time. . .
Paul Levine – To Speak For The Dead 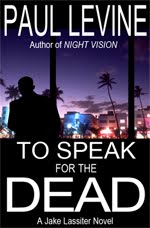 Miami trail lawyer Jake Lassiter, "ex-football player, ex-public defender, ex-a-lot-of-things," is defending Dr. Roger Salisbury, a surgeon and womanizer charged with malpractice in the death of wealth Philip Corrigan. But the dead man's daughter insists that the doctor and her sexy stepmother conspired to kill her father-and wants Lassiter to prove it.

Can Lassiter really defend his client for malpractice and builds a case against him for murder? tuming to help to the wisdom of his old friend, retired county coroner Charlie Riggs, Lassiter hopes to get the evidence he needs from the dead man himself. But outside the courtroom, he soon finds more trouble that he ever imagined possible-murder, missing persons, grave robbery, kinky sex, and deadly drugs-as he searched Florida's steamy streets and tropical swamps for a cold-blooded killer.

"Paul Levine has created himself a hero crafted for the 1990s...Levine keeps the plot spinning and the pages tuming."-United Press International
The Lassiter series to date is: 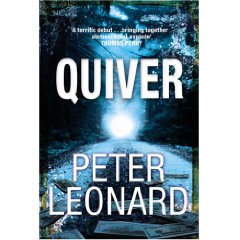 Hands up time! When this was initially published, I was pretty scornful of a couple of reviews for the author, perhaps believing it was a case of nepotism at play. I was at an age where I should have known better. Peter, son of Elmore, has subsequently written 4 or 5 well received crime fiction books. It would be useful if I actually read the thing before passing judgement, something I will get around to one of these years. Apologies for now, Mr Leonard.
One of the most riveting and powerful new voices in crime fiction, Peter Leonard delivers a razor-sharp debut thriller.

Quiver marks the breakthrough of a new force in thriller writing---an explosive and unforgettable debut.
"With its clever plotting and blood-and-guts characters, Quiver will certainly put Peter Leonard on the map. This is the start of something special."
Michael Connelly
"Quiver's supercharged plot, rhythmic dialogue, and cool-under-pressure characters kept me reading into the night. An impressive, exciting debut from Peter Leonard."
George Pelecanos
"Peter Leonard has a good ear for voices, a good eye for detail, and a talent for bringing together elements that can't do anything but explode."
Thomas Perry
"Quiver is a surprise and a delight, a twisty deadpan troll through some very devious neighborhoods. I welcome Peter Leonard and look forward to whatever he wants to offer next."
Donald E Westlake
Eddie Little – Another Day In Paradise 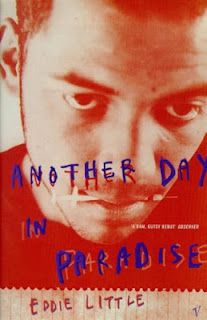 I have this and his other book Steel Toes both sitting unread for longer than the author has been deceased. From the Los Angeles Times on 23rd May, 2003....
Eddie Little, whose first novel, "Another Day in Paradise" (1998), was a fictionalized account of his life as a drug addict, thief, con man and convicted criminal, died Tuesday of a heart attack in a Los Angeles motel room. He was 48.
Born in Los Angeles and one of three children, he said that his father, a schoolteacher, taught him to read by twisting his arms behind his back and squeezing tighter if he mispronounced a word. After that, Little said, he became a compulsive reader and writer.
When Bobbie meets Mel he' 14, a 'very fucked-up kid', shooting speed, eating pills, surviving by robbing vending machines, petty burglaries,stealing stereos out of cars...Mel knows things - like how to crack a safe, the best way to set up bogus checking accounts, the fine art of cutting through walls and ceilings - he teaches Bobbie not only how to survive, but how to actually thrive. As Bobbie says, it's 'kinda like Jesuit training for thieves'. 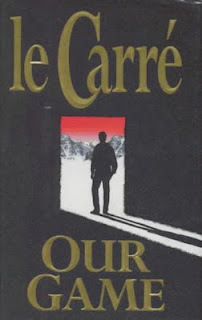 John Le Carre – Our Game
I had this as a present for either my birthday or at Christmas from one of my sisters back in 1995.(I’m assuming she bought it when it was published.) Having in the past year or two extended my genre reading into espionage and thriller territory, I am anticipating that it won’t be another 18 years before I eventually get to this! I have managed to read one of the George Smiley books and hope to read my way through the whole series at some point.
Tim Cranmer, retired secret servant and Larry Pettifer, bored radical don, philanderer and for 20 years Tim's mercurial double agent against the now vanished Communist threat, have an unresolved rivalry that dates back decades. They follow each other to Moscow and then Southern Russia. 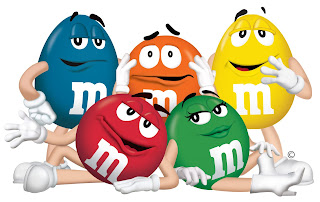