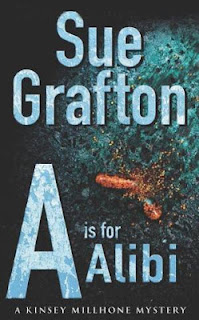 
‘My name is Kinsey Millhone. I’m a private investigator, licensed by the state of California. I’m thirty-two years old, twice divorced, no kids. The day before yesterday I killed someone and the fact weighs heavily on my mind . . .’ When Laurence Fife was murdered, few cared. A slick divorce attorney with a reputation for ruthlessness, Fife was also rumoured to be a slippery ladies’ man. Plenty of people in the picturesque Southern California town of Santa Teresa had reason to want him dead. Including, thought the cops, his young and beautiful wife, Nikki. With motive, access and opportunity, Nikki was their number one suspect. The Jury thought so too. Eight years later and out on parole, Nikki Fife hires Kinsey Millhone to find out who really killed her husband. But the trail has gone cold and there is a chilling twist even Kinsey didn’t expect . . . ‘Skilful and ingenious’ Irish Times ‘I love Sue Grafton’s Kinsey Millhone novels . . . you are never disappointed’ Guardian ‘Will keep you awake until the last page has been turned’ Daily Mail

Well having admonished myself for ignoring the female crime writing fraternity for not months, in truth years, I have decided to address that deficiency in my reading. As an aside, I was once browsing a second hand book store and picked up a book - Bleedout  - authored by I thought John Brady, on closer examination it was actually written by Joan Brady............so I put it back, why? I can’t really explain. Any way glossing over that example of blatant sexism, we return to Sue Grafton and the first in her Alphabet series starring Kinsey Millhone.


Kinsey is hired by Nikki Fife to uncover who killed her adulterous husband, Laurence. Nikki having just been released from prison after serving eight years for the murder professes her innocence and wants Millhone to dig into the past.


Having had a passing acquaintance with the dead Laurence and a vague recollection of his murder, Kinsey starts looking over the original investigation, discovering there was a second fatality exactly like Fife’s death a short period afterwards. Libby Glass, an accountant who crossed paths with Laurence Fife was poisoned in exactly the same way as the lawyer, though her client was never charged.


Kinsey backtracks into Fife’s personal and business relationships as well as looking at Libby Glass’ surviving family believing that there is an obvious link between the two crimes. Gwen, who was Fife’s first wife and Charlie Scorsoni, Fife’s friend and former business partner are obvious avenues for information as well as Fife’s children with Gwen and one of his rumoured sexual partners who may have held something over him judging by her attitude towards him in the workplace; Sharon Napier.


Fast forward to page 345, a longish book for a first novel and Grafton brings Millhone’s first highlighted investigation to a satisfying conclusion.


And the verdict was........ interesting and enjoyable, albeit a little bit different from the male PIs I have been reading a lot of lately. Whilst Matthew Scudder and Elvis Cole can on occasion be drawn into physical violence and their authors can engage the readers with a bout of fisticuffs, this approach is never really going to work for Kinsey, particularly as Grafton has not gifted her a skill-set involving the martial arts. Instead Millhone uses intelligence, tenacity and a logical approach to her sleuthing. When the inevitable confrontations arise, she doesn’t lack for bravery.


I didn’t really feel a great warmth or affection for our heroine, as yet. I was probably more of an interested bystander watching Millhone’s enquiry progress. Kinsey has a past, with two failed marriages behind her. She lives economically in a small apartment, with apparently no close friends or family. She enjoys sex and alcohol when it’s available, but has no addiction or issues with either. She appears to be alone without being lonely. Definitely someone I would like to read more about, particularly in the hope of discovering more about her past. I’ll be back at some point with B, then probably C and maybe D, but not straight away.


I picked up my copy by swapping on the Readitswapit  website in exchange for something else.
I do anticipate reading further female written fiction this month. Go me!