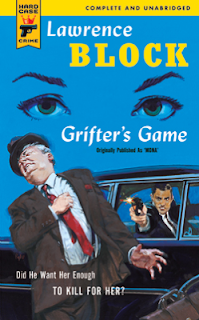 Con man Joe Marlin was used to scoring easy cash off beautiful women. But that was before he met Mona Brassard and found himself facing the most dangerous con of his career, one that will leave him either a killer — or a corpse.

No one but multiple Edgar Award winner Lawrence Block could tell this story of dangerous men and wicked women, of greed and desire and nail-biting suspense. It will grab you by the throat on the first page and won’t let go till the breathless, unforgettable climax.

This was June’s book choice for my Pulp Fiction group over on Goodreads.  A short novel weighing in at just over 100-odd pages, originally published back in 1961 under the title of Mona, Grifter’s Game was short, sharp and shocking with a few twists.

I managed to read it in just over a day, having managed to get back on my reading track with the help of Terry Shames’ excellent debut.  It would be fair to say that in a straight match-up between this and some of Mr Block’s early Scudder books that I have been reading lately, I have enjoyed the Scudder’s more.

Grifter’s Game gives us Joe, conning and scoring his way from hotel to hotel, city to city with barely a backward glance when the jig is up. On his exit from one city via train (memory fails me, where) he lifts a couple of suitcases at the station and on arrival in Atlantic City discovers he’s the unwitting owner of a large stash of heroin. Quickly realising the danger to himself, he secures the load in his hotel safe rather than keeping it in his room.

After a swim on the beach Joe crosses paths with femme fatale, Mona. A couple of trysts later and after the discovery by Mona of her husband’s stolen suitcases in Marlin’s room; Marlin the conman, for so long the controlling player in the game of the con, starts getting played by Mona.

Enjoyable and interesting, I read along without feeling any emotional investment in the outcome. Neither Joe, Mona or the husband and their fates and the ultimate outcome inspired in me any sense of anxiety or fear for any of them. I was more of an interested bystander, though that said the ending rocked.

I have depicted the Hard Case crime reprint cover, but my copy was actually acquired as a 5 book omnibus from Amazon last month. Try holding that baby up, when you’re laying down reading it in bed! Other titles in the edition are Coward’s Kiss, Deadly Honeymoon, The Girl With The Long Green Heart and You Could Call It Murder. 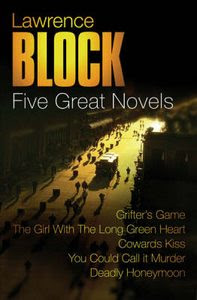