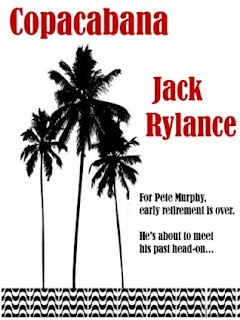 Having retired from the crime world, Pete Murphy relocates from Liverpool to Rio de Janeiro. Here he throws himself into the wild and sordid nightlife of Copacabana in an effort to forget that brutal murder which forced him into exile.

This self-destructive routine is interrupted by the arrival of John Mullan, a young petty thief who has long idolized Pete, and is now on the run from associates back home. A situation further complicated by the £200,000 of stolen money which John has brought with him.

As the repercussions of this theft become ever more clear, the scene is set for an explosive showdown.

Pete Murphy is about to meet the ghosts of his past head-on.

I was interested in reading this, as to date my reading journeys into South America have been somewhat sparse. I can’t recall trying a book set in Brazil before, so it was a first for me.

Pete is our main character and we follow the tedium of his everyday life as a retired ex-pat living in Brazil...........go out, have a few drinks, snort a few drugs, show some attitude to the locals, grease the cops when you have to, do some more drugs, meet some fellow ex-pats, share the same old tired stories, drink coffee and a beer, go home, go out, do some drugs, go to a club, meet your sometime girlfriend – if she’s not seeing one of her other two fellas, have sex, go home, sleep off the hangover, wake up..........do it all again........repeat, repeat, repeat.

John arrives in a frenzy from Scallyland, toting a suitcase full of cash, which he’s lifted from some hard-case criminals back home. Pete, unable to turn his back on John, despite quickly resenting the intrusion and disturbance to his relatively tranquil existence, finds himself remembering his Liverpool days and anticipating a visit from Vince and Totsy - a pair of violent criminal gangsters with whom he had history.

John’s arrival has no immediate impact on Pete’s existence and life continues, with back story from both covering the history that sees them to the points in their lives where they are at now.

The two low-lives, Vince and Totsy eventually show up for the day of reckoning.

I found this first novel interesting enough and enjoyable without being overly bothered by the fates of both John and Pete.  The ending did have an ambiguous feel to it, which offers some scope for further reappearances of either or both of our protagonists.

The action was fairly pedestrian until the end and felt like more of a character study or observational piece on bored ex-pats living it large abroad rather than a gritty crime novel. I would read another book by the author in the future.

My copy was secured on an Amazon giveaway by the author.