A decent month's viewing - 1 x TV mini-drama finished, 1 x 80s classic scare em film featured on TV, a Netflix documentary on Rachel Dolezal and 4 cinema trips, though as I only live 5 minutes walk now from my local library and they have a theatre that shows films a couple of months past their release date, it wasn't quite as expensive as it might have been.

Last part of three watched and okay, but nothing to get too excited about. A few twists and turns, a big secret and a separation of a family with a reconciliation of sorts, or at least a measure of civility at the end. My son thought Ecclestone's Irish accent was well dodgy. I can't say it grated on me though.

One of the best films I've seen in a few years. As soon as it finished, I could quite happily have sat through the whole thing again. When's the DVD out? Highly recommended, though be prepared for a bit of rough language. Frances McDormand, Woody Harrelson and Sam Rockwell are all pretty amazing.

Mildred Hayes, a hard-nosed mother is seeking justice for her murdered daughter. With no arrests after seven months, Mildred puts up three roadside signs to goad Ebbing police chief into action. But the law - and especially Sam Rockwell's hot-headed deputy - don't take kindly to the provocation. And the townsfolk are on their side. But Mildred doesn't care about ruffling a few feathers. In fact, she's happy to pluck the whole bird.


I read the book of this one by Jonathan Ames back in 2014 and as soon as I heard about the film with Joaquin Phoenix it went on the list. Dark, brutal, disturbing and a bit puzzling in places, I really liked it, though I wouldn't necessarily rush to watch it again. 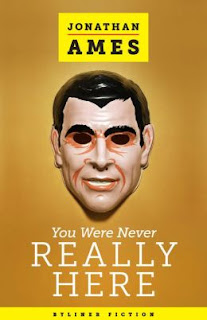 A traumatized veteran, unafraid of violence, tracks down missing girls for a living. When a job spins out of control, Joe's nightmares overtake him as a conspiracy is uncovered leading to what may be his death trip or his awakening.

I'm not the world's biggest Star Wars fan and was a bit ambivalent about seeing this, but had my arm twisted by the rest of the family. And I did get fed at Nandos beforehand. I actually really enjoyed it.
Double bonus then. I really liked Woody Harrelson - second time in his company after Three Billboards. The main female part was someone off Game of Thrones, who I recognised but couldn't name. I've no idea who Hans Solo was either.

Young Han Solo finds adventure when he joins a gang of galactic smugglers, including a 196-year-old Wookie named Chewbacca. Indebted to the gangster Dryden Vos, the crew devises a daring plan to travel to the mining planet Kessel to steal a batch of valuable coaxium. In need of a fast ship, Solo meets Lando Calrissian, the suave owner of the perfect vessel for the dangerous mission -- the Millennium Falcon.

I got dragged along to see this one by my son, who was keen, me much less so. I think perhaps because my expectations were really low, I actually enjoyed it a helluva lot more than I expected to. Maybe I'm over-thinking things, but I could make a case for elements of the story semi-mirroring views from the present POTUS on a few groups in America.

When, by executive decree, all the canine pets of Megasaki City are exiled to a vast garbage-dump called Trash Island, 12-year-old Atari sets off alone in a miniature Junior-Turbo Prop and flies across the river in search of his bodyguard-dog, Spots. There, with the assistance of a pack of newly-found mongrel friends, he begins an epic journey that will decide the fate and future of the entire Prefecture.


I must have seen this years ago - who hasn't?  But I was keen to re-watch it when it popped up on TV recently on a Saturday night. I don't think I recalled how it ended so it was almost like watching a new film - not quite I suppose - Here's Johnny! Well worth a look and I'll probably watch it again in the future, maybe not leaving it 38 years next time. I'm still semi-hypnotised by the child riding his tricycle around the deserted hotel corridors.

Jack Torrance (Jack Nicholson) becomes winter caretaker at the isolated Overlook Hotel in Colorado, hoping to cure his writer's block. He settles in along with his wife, Wendy (Shelley Duvall), and his son, Danny (Danny Lloyd), who is plagued by psychic premonitions. As Jack's writing goes nowhere and Danny's visions become more disturbing, Jack discovers the hotel's dark secrets and begins to unravel into a homicidal maniac hell-bent on terrorizing his family.

An interesting documentary on Rachel Dolezal. Scratches beneath the surface and gets past the screaming headlines regarding her fakeness in respect of how she presented herself. It was hard not to feel sympathy for her at times. Similarly, I could understand how she pisses some people off. Not always a comfortable watch.

Rachel Dolezal, her family and her critics reckon with the aftermath of a national debate sparked by questions about her racial identity.
Posted by col2910 at 00:23