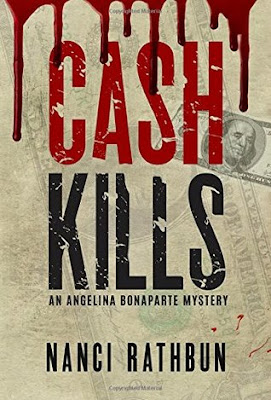 A double murder. A mysterious inheritance. One PI is about to follow the money all the way into a den of thieves…

After surviving a bullet, Angelina Bonaparte was certain she could handle any case that came her way. But when her next client walks through the door with an unexplainable seven-figure inheritance after the death of her parents, the private investigator wonders if she's in over her head. After all, when she visits her client's family attorney, Angelina discovers yet another bloody crime scene.

With the help of her new flame, Angelina follows the clues into an underworld of war-plundered artifacts, stolen treasures, and deadly consequences. As their last lead grows colder, the PI must catch the killer before an endless cycle of murderous greed gets her client killed.

A new-to-me author with Nanci Rathbun and only my second time with a female PI after enjoying Susan Grafton's Kinsey Millhone in A for Alibi a few years ago.

Unfortunately I found it a difficult book to read, probably as much due to personal circumstances as to any failure of the author to captivate and engage me. Reading it straddled a difficult time period of leaving an old home after 25 years and moving to a new one. Physical and mental fatigue as well as demands on my time left little in the tank to enjoy my usual leisurely pursuits of reading and to a lesser extent blogging. Whatever book I happened to be reading would undoubtedly have been a distraction and irritation.

Plus points - I enjoyed the set-up and the premise of the case. A bereft daughter is struggling to come to terms with the death of her parents and also the fact that having lived their lives so frugally they manage to leave her a million dollar inheritance. Angelina Bonaparte, our PI and lead character has to discover the provenance of the cash, before her client, Adriana can decide whether to accept it or not.

As a character, I enjoyed Bonaparte's instincts and abilities and her interactions with her friends, family and cop boyfriend. Said boyfriend also has an interest in the case, as Adriana's parents were murdered - execution-style. A second murder, soon after Angelina takes the case raises the stakes.

The unfolding of the mystery, the uncovering of facts and establishing the motive for the crime and the introduction of secondary characters to also shed light and become part of the hunt for the murderer and provide security for Angelina and her client, as they became endangered, the closer to the truth they got was logical and well reasoned. The events which set the whole scenario in motion were of interest and provided pause for thought. Without giving too much away; a horrific event in recent European history, the conflict in the Balkans is the backdrop to our book.

Irritating elements - the author's insistence on talking us through our 50-something PI's daily outfits including her choice of lingerie, pretty much each and every time the sun rose. I get that the character has spunk and a certain feistiness and has got over the divorce from the cheating husband and is proud of her status as an independent woman with a career, grown-up kids and grandchildren, and new found beau. I don't really need to picture her wearing a thong because it's date night.

Secondly, the secondment of gay best friend Bobby into the investigation and a willingness to have him as a PI trainee, I wasn't especially convinced by. A minor annoyance in the scheme of things, I suppose. I quite liked Bobby as a minor character, and his support with Angelica's client, Adriana was crucial, but I wasn't sold on his sudden career ambitions.

Pace - I'm undecided on really - mainly due to my own reading issues. At times it felt like I was swimming through treacle, but again, more me than the book I think. I'd willingly try a second book by Rathbun before determining whether I would continue reading her in the future. 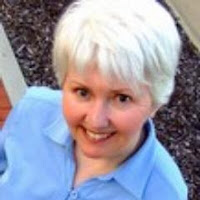 Nanci Rathbun has two other Bonaparte books to her name. Truth Kills is the first in the series and Honor Kills which was published at the beginning of May is the third.