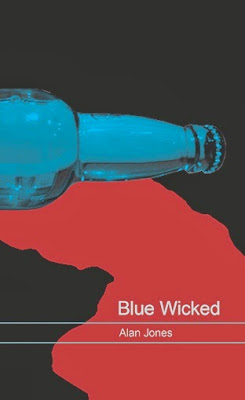 The tortured corpses of young alcoholics and drug addicts are turning up in Glasgow and only Eddie Henderson seems to know why. When he tries to tell the police, his information is ridiculed and he's told to stop wasting their time.

One officer, junior detective Catherine Douglas, believes him, and together they set out to discover why the dregs of Glasgow's underbelly are being found, dead and mutilated.

"This is an accomplished, well-constructed crime novel that deserves a wide audience….In Blue Wicked Jones takes a huge step forward as a writer."

Keith Nixon, author of The Fix and The Eagle's Shadow.

Blue Wicked is the second book from Scottish author Alan Jones. The Cabinetmaker was his debut and appeared in late 2013.

Our main character is Eddie Henderson, a vet working in Glasgow. Eddie is disturbed by a number of incidents involving cats where the animals have been sadistically tortured - rather imaginatively - before dying painfully. A bit of research and he is convinced that the same person is responsible and that it may be a precursor to more serious things ahead.

He’s correct and after an initial brush-off from the police, is involved as veterinary consultant to the investigation into the murders of several men in the Glasgow area. The murders replicate the pattern of animal tortures that Eddie has been focusing on – impalement, crucifixion and a rather cruel glass tank murder. A common factor is the poisoning of the victims – both feline and human with antifreeze – Blue Wicked! Targeting alcoholics and addicts from the lower rungs of Glaswegian society, offers the killer(s) easy opportunity to snare a victim that won’t be readily missed by many.

Eddie’s initial liaison with the police is a young DC, Catherine Douglas. Douglas is capable and enthusiastic as well has having a strong personality – something essential in a mostly male dominated environment where sexism still has some prevalence in her workplace. Eddie himself is dedicated, a little bit idealistic, good at his job, a bit of a loner and single. Working closely together, a clandestine romance blossoms – one which was credible and enhanced the story rather than detracted from it.

As our case develops we are treated to some of the workings of a vet’s daily life. We view the internal politics of a small practice where conflicts over commitment and profit among partners are never too far away. And we have a view of a police investigation; with a team under pressure to achieve a result, once the news breaks that a serial killer is at work. Good cops, sensitive cops, credit-stealing cops and the minority with a Neanderthal attitude to woman and outsiders .

Overall Blue Wicked was an engrossing read. Enjoyable, interesting, humorous and satisfying with a few twists along the way.

Great setting – Glasgow – with plenty of local dialect prevalent. Something which firmly roots the story in the city. The author provides a glossary both of medical terms and dialect at the end of the book which may help those unfamiliar with both.

One word of caution – the book is extremely graphic in places. Jones doesn’t pull any punches when showing his readers the cruelty his perpetrators inflict on their victims. Uncomfortable at times – and not for a sensitive reader.

The author was kind enough to send me a copy of this for review.
You can access a sample from Blue Wicked here.

My review of The Cabinetmaker is here. 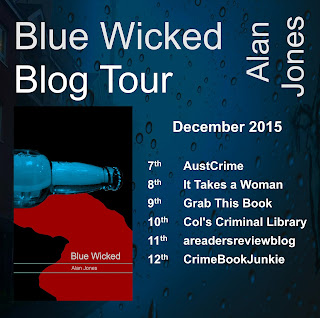 He will be back on the blog tomorrow offering some thoughts on his favourite books, films and music!

Catch up with the tour so far and pop back tomorrow!