From the self-illustrated, unpublished work written in 1947 to hardboiled contributions to 1980s adult magazines, The Bells Tolls for No One presents the entire range of Bukowski's talent as a short story writer, from straight-up genre stories to postmodern blurring of fact and fiction. An informative introduction by editor David Stephen Calonne provides historical context for these seemingly scandalous and chaotic tales, revealing the hidden hand of the master at the top of his form.

"The uncollected gutbucket ramblings of the grand dirty old man of Los Angeles letters have been gathered in this characteristically filthy, funny compilation ...Bukowkski's gift was a sense for the raunchy absurdity of life, his writing a grumble that might turn into a belly laugh or a racking cough but that always throbbed with vital energy."--Kirkus Reviews

Born in Andernach, Germany, and raised in Los Angeles, Charles Bukowski published his first story when he was twenty-four and began writing poetry at the age of thirty-five. His first book of poetry was published in 1959; he would eventually publish more than forty-five books of poetry and prose. He died of leukemia in San Pedro, California on March 9, 1994.

David Stephen Calonne is the author of several books and has edited three previous collections of the uncollected work of Charles Bukowski for City Lights: Absence of the Hero, Portions from a Wine-Stained Notebook, and More Notes of a Dirty Old Man.

Another book accessed via Edelweiss review site and another book slightly confusing in its formatting. It was kind of hard to determine what piece ended and started where - at least when I was dipping in and dipping out of the book. Once I got stuck in so to speak it was better.

Part autobiographical, part fictional, part journalistic – as a lot of the pieces were original Notes of a Dirty Old Man columns. Bukowski has a way of presenting the mundane, boring and everyday minutiae of day to day living and making it entertaining.

Not everyone’s cup of tea, as he talks about trips to the racetrack, boozing with casual friends and semi-serious relationships with writer-groupies that seem drawn to the dangerous and sleazy side of Hank Chinaksi – Bukowski’s alter-ego. Sex is prominent and Bukowski writes about it graphically, not so much to shock as to tell it how it is, I think.

There’s a few occasions when his comments seem harsh, but perhaps there’s a nugget of truth in there – “Most men settle for 2nd or 3rd or 4th best simply because they are afraid, simply because they lack the guts to live alone. They accept all the flaws in another person simply to have them around.” 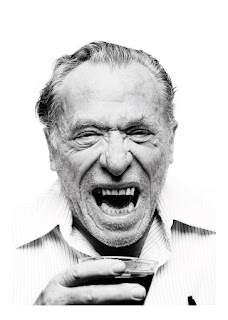 I wouldn’t recognise that as a description of myself, but when I view my workplace and look at the numbers of people I know on second marriages, divorced, separated from children; who’s to say he’s wrong?

There’s some pithy observations on Vietnam and the return of the POWs. I don’t think Bukowski was a fan of war full-stop.

Here were men who had flown in bombers and dropped thousands of tons of explosives upon cities and people. Here were killers being honoured as heroes. The sympathy pangs, of course, were for these poor fellows whose aircraft had happened to get hit, forcing them to bail out, become captured and imprisoned where they were forced to eat meals not chosen from a menu. We here in America have imprisoned men for much less, fed them badly, and they were hardly heroes when they came out.

Hard to recommend this but it mostly worked for me. I’ll be reading more from Bukowski in the years ahead.

Accessed via the Edelweiss review site.