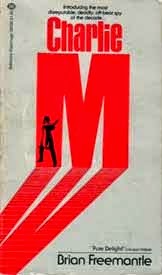 A cagey British spy fights enemies from without and within
Charlie Muffin is an anachronism. He came into the intelligence service in the early 1950s, when the government, desperate for foot soldiers in the impending Cold War, dipped into the middle class for the first time.

Despite a lack of upper-class bearing, Charlie survived twenty-five years on the espionage battle's front line: Berlin. But times have changed: The boys from Oxford and Cambridge are running the shop again, and they want to get rid of the middle-class spy who's a thorn in their side. They have decided that it's time for Charlie to be sacrificed.

After a recent reminder about the book by blog friend Vicki, I decided to take it on my recent holiday and immerse myself in the intriguing world of duplicity, deceit and chicanery between the British, the Americans and those pesky Russians during the height of the Cold War.

184 pages long, a quick read, action and humour in abundance, fascinating portrayal of the murky dealings of the various intelligence services and the blatant disregard those in authority have for the underlings in their operations.

Our main man, Muffin has a lot of endearing and positive characteristics……..he’s loyal, capable, shrewd and intelligent to mention a few; all traits which serve him well in his chosen profession. I never found him truly likeable though. He cheats regularly on his wife and he seems to have hang-ups about money. His current boss and his cronies treat him fairly appallingly and want rid. All of these issues, keep the story bubbling along and make for a fast compelling read.
Imperfect characters often make for more interesting reading and Charlie is never less than interesting and entertaining. Freemantle moves the action around Europe as our story unfolds….Berlin, London, Czechoslavakia (pre-split obviously) and Austria. We cross the Atlantic as well, when the US in the guise of the CIA take an interest in developments.

With some reluctant inter-agency cooperation, we reach a climax between the interested parties.

A fantastic read overall; any book that has you thinking about it a couple of weeks past finishing time has plenty of plus points. Perhaps reading book 2 in the series, will finally decide me on this one.

Highly recommended if you are a lover of espionage, the Cold War and well-written spy shenanigans.