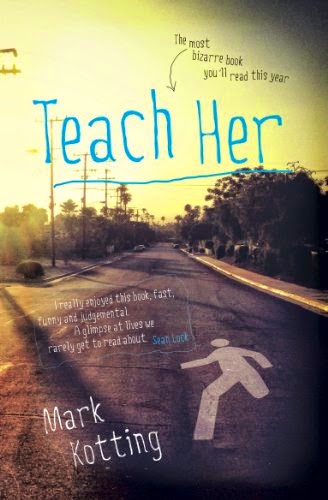 Teach Her is a fast moving, darkly humorous novel. A who did what to who and why.
A teacher is in for the chop. An ex pupil with psychotic tendencies wants answers. A one legged soldier home from war has revenge in his heart.

Tension is rising as a diverse set of people struggle to live side-by-side in a small town.
A sparky and quirky tale that will leave you questioning the influence of teachers and the value of a fake leg.

‘I really enjoyed this book, fast, funny and judgemental. A glimpse at lives we rarely get to read about.’ Sean Lock

I need to read more books like this to get my reading back on track. Fast paced and funny, 205 pages…..BANG read on a Sunday afternoon, whilst keeping one eye on the French tennis final!

We have a fractured marriage, with the jaded wife, Shirley who is also a jaded teacher walking out on her barber husband, Jim. Jim in truth isn’t too surprised and their spotty, adolescent, teenage son Luke couldn’t really give a monkey’s.

We follow Shirley’s in her new life and her dance classes. We see Jim in his daily routine, semi-oblivious to the needs of his son. Luke has his own issues and concerns – are these spots ever going to clear up, will he ever gain acceptance from his peers and graduate from the lonely awkward geek that he knows he is?

Danny, now enters the mix. Danny’s just back from Blair’s last crusade overseas and he’s a damaged man because of it. As a favour to Danny’s father, his drinking compatriot, Jim takes Danny on at the shop trying to teach him the ropes.

Our marriage break-up, initially one of apathy and indifference, becomes increasingly fractious and Luke and his failing at school becomes a battleground between the estranged spouses. Shirley takes matters into her own hands.

Danny’s return has re-awakened an enmity in his brother, with disastrous consequences, which brings our one-legged veteran, Carl into the fray. 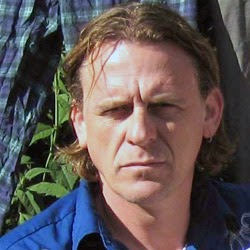 One further twist, reveals a connection between Shirley and Danny’s brother which itself re-awakens old wounds and fuels a need for revenge.

Darkly humourous in places……how far would you go to ensure your daughter’s dog was permanently exiled from the household? Teach Her was a short, sharp, quick satisfying read which ticked a helluva lot of boxes for me.
4 from 5

Our author, Mark Kotting has led an interesting life so far. His brief biography on Amazon supplies the following details. Mark was born and bred in London, and moved to Sydney for a while to look at the surf. He has written TV and radio comedy including two plays for BBC Radio The Match and Gulf and is the author of Teach Her, Babble and Squeak and Nappy Rash.

Mark is a London Cab Driver, who once played second division Rugby League. He recently embarked on a 10,000 motorbike ride from London to Beijing.


I wouldn’t be averse to reading either of his other books, as I reckon they’re right up my street.
Posted by col2910 at 01:25