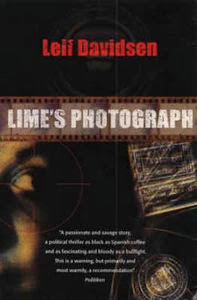 Peter Lime is trained to hunt down his prey and catch them on film. But now he is the one being hunted. Whose prey has he become? And what is it that he has that these people will kill to get?

Lime is a Danish paparazzo, living in Madrid. For more than 20 years he has stalked and captured the rich and famous on film, making vast sums of money from exposing their secrets - the more salacious the image, the bigger the fee. But lately he's been thinking of giving it up. His wife and child have changed his life, and now he dreams of doing a job that his daughter can be proud of.

Then he goes on a routine assignment, snapping a Spanish minister out sailing with his mistress, and suddenly his world is turned upside down. When a fire destroys his home, but not all of his photographs, Lime sets out to discover a motive and finds himself drawn into the complex and terrifying web of international terrorism.

In keeping on top of a couple of my own personal reading challenges, I selected a Scandinavian book which was the recipient of the 1999 Glass Key Award; thus killing two birds with the one stone.

An interesting book, well-written and engrossing and in parts educational, particularly as my previous knowledge of the Spanish Civil War and subsequent strife in the country was bordering on ZERO to MINIMAL. I feel compelled to find out more about the origins of this conflict and how it has resolved itself, and what Franco’s legacy has been to his country.

The author has one of his characters make a couple of claims which may or may not be true, but I’m intrigued enough to pursue them and expand my knowledge at a later date.
Franco was a necessary evil insofar as he dragged Spain into the twentieth century and enabled her to start looking forward as opposed to always looking back. Despite the opposition to his regime, in many ways he united the country.

Franco’s regime (unlike the Fascist regimes in Italy and Germany) was guaranteed its survival by the US in return for its anti-communist stance and the allowing of US bases on its territory.

I think my enjoyment stemmed as much from the history lesson as from the resolution to the mystery for the deaths caused by Lime’s Photograph. This was my first book by the author and I do have a second book by him rattling around somewhere – The Serbian Dane, which I will get to at some point.

I don’t always pigeon-hole books but this could also be considered as a thriller/espionage type book as opposed to something which sits firmly on the crime fiction shelf.

I bought a second-hand copy earlier this year on ebay.