DANIEL CURZON - HALFWAY TO THE STARS 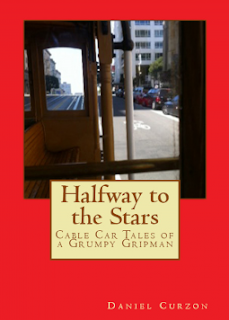 Based on real events, unforgettable. debunking chapters of today told by a long-term, snarky gripman on San Francisco’s cable cars, tales you won’t hear in most places where Political Correctness trumps real-life observations, especially about people playing race and ethnicity “cards,” made salty, honest and very funny, as told by the “grumpy gripman” narrator, who finds himself in the so-called Land of Free Speech, but where it is always other people who tell you what can say and even think, despite your own experiences.

The tale of One-Tooth or the little ghost boy or the elderly twin sisters or the Chinese dishwasher or Bitty the pet rat or Machete Man or a Sister of Perpetual Indulgence will put a lump in your throat or possibly blow up your P.C. meter. Might appeal to those who are “progressive,” depending on the issue, conservative,” depending on the issue, or neither, and tired of being forced to choose one or the other.

Another day, another book and another new author for me to try. Daniel Curzon according to his Wikipedia entry “is a novelist, playwright, educator, and writer of etiquette manuals for gay men.” His 1971 book – Something You Do in the Dark may be considered as one of the first gay protest novels – it’s the tale of a gay man’s attempt to avenge his entrapment by a Detroit vice squad police officer by murdering him. (I quite like the sound of this one TBH !)

Back to Halfway To The Stars then. We have pretty much the diary of a grumpy cable car gripman. We suffer with him during his daily dose of never-ending interfaces with San Francisco’s diverse population. Drunks, gang members, the elderly, blacks, Hispanics, Orientals, politicians and perverts all cross his path daily and all seem to irritate him in one way or another. There’s some sadness to accompany his bitterness as he rages against all things politically correct.

I think I could empathise with him, as I sometimes have the same dark thoughts myself. Maybe as I get older I’m becoming less tolerant and more irritated by society in general.

Curzon whilst venting his fury is extremely funny at the same time, on that basis 4 from 5.