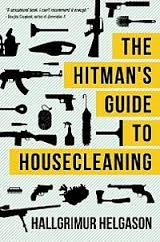 With some 66 hits under his belt, Tomislav Bokšić, or Toxic, has a flawless record as hitman for the Croatian mafia in New York. That is, until he kills the wrong guy and is forced to flee the States, leaving behind the life he knows and loves. Suddenly, he finds himself on a plane hurtling toward Reykjavik, Iceland, borrowing the identity of an American televangelist named Father Friendly. With no means of escape from this island devoid of gun shops and contract killing, tragicomic hilarity ensues as he is forced to come to terms with his bloody past and reevaluate his future.

Hallgrimur Helgason was born in Reykjavik, Iceland in 1959. He started out as an artist, showing his work in several galleries of both New York and Paris, where he lived in the late eighties and early nineties. He made his debut as a novelist in 1990 and gained international attention with his third novel, 101 Reykjavik (“Imagine if Henry Miller had written Tropic of Cancer on crack instead of wine.”-Tim Sandlin), which was made into a film starring Victoria Abril. In 2001 Helgason received the Icelandic Literary Prize for The Author of Iceland. He has twice been nominated for the Nordic Council Literature Prize, with 101 Reykjavik in 1999, and Stormland in 2007. A film based on the latter was released in early 2011. The Hitman’s Guide to Housecleaning is his only novel written in English. It was published in Iceland in 2008, in the author’s own translation, and became a bestseller in Germany in 2010. A father of three, Hallgrimur divides his time between Reykjavik and Hrísey Island.

I was interested in completing my personal Scandinavian reading challenge, by trying something a bit different from the mainstream fare on offer. This was recommended to me by Amazon, so I thought why not?

I could say that the best thing about this book was the title or the cover, but that would be unnecessarily harsh. Whilst the book was okay, insofar as I didn’t want to stick pins in my eyes whilst reading it, it wasn’t the best thing I have ever read. I would be loathe to recommend it to others.

Decent premise.... a hit goes wrong, the hitman flees, kills a priest and assumes his identity. After landing on Iceland he encounters fellow holy rollers, who initially welcome him, then after his identity is uncovered, try to help him repent and embrace God and move on with his life.

His old comrades come calling eventually. A bit of love action, a bit of reminiscing about the old days of the Bosnian conflict, where our hitman discovered his prowess for killing, a bit of Icelandic life – boy does he find it dull.

Interesting up to a point, but it just never really took off for me at all. I had a few chuckles along the way, but truth be told, I won’t be rushing to read more by this author.