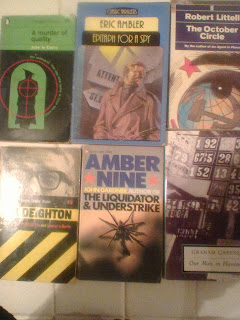 A few years ago, I decided there was something missing from my reading. Crime after crime after crime can be a bit numbing, so in a bid to keep things fresh I decided to venture into the world of Chick-Lit. Actually not, I thought a bit of intrigue, a bit of politics, a bit of dark art scheming in the shadows, lone wolf agents, the Cold War.......a whole world of fiction that I had ignored for too long..........Espionage!

What followed was the typical scenario, I read a couple of Olen Steinhauer books set in 60's Eastern Europe, loved them. Went out and bought a load of books by Adam Hall, John Le Carre, Charles McCarry, Len Deighton, Stella Rimington, Alex Berenson, Anthony Price - to name a few and then carried on reading my usual fare. Of the above, I have read one Le Carre and one Deighton book of short stories to date.

In 2014, I will set myself a target of reading 12 books that are pigeon-holed in this genre. 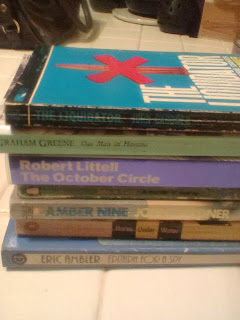 If I can read a few that fill some spots on my other reading challenges, probably Vintage reads with maybe a USA state of two, all the better.

2014 then I will hopefully spend some time in the company of Bourne, Smiley and Palmer as well as some other agents, Liz Carlyle, John Wells, Paul Christopher!