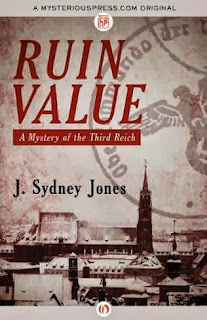 Synopsis/blurb............
Nuremberg is a dead city. In the aftermath of World War II, two-thirds of its population has fled or is deceased, with thirty thousand bodies turning the ruined industrial centre into a massive open grave. Here, the vilest war criminals in history will be tried. But in Nuremberg’s dark streets and back alleys, chaos rules.
Captain Nathan Morgan is one of those charged with bringing order to the home of the war crime trials. A New York homicide detective who spent the war in Army intelligence, he was born to be a spy—and now, in 1945, there is no finer place for his trade than Nuremberg. As the US grapples with the Soviets for post-war supremacy, a serial murderer targets the occupying forces. Nathan Morgan may be the perfect spy, but it’s time for him to turn cop once more.

This was another freebie book thanks to a Net Galley invite from Emma at Open Road Media/Mysterious Books and an offer I’m really happy I took advantage of.

A historical murder mystery set in Nuremberg, Nazis about to appear on trial, Third Reich sympathisers and gangs still active in the ruins of a city nearly obliterated by Allied bombing, a local population living in squalor and deprivation, women reduced to prostitution to survive, corruption within the police force, an uneasy alliance between the disparate strands of the victors (East v West) and the vanquished, as the Allies struggle to get the city moving again and restore law and order to the streets, owned by night by black marketers and opportunists, whilst the unburied dead rot in the rubble. All this and more - with the back-drop of the biggest trial of the century looming near - and a deranged killer on the loose.

I could almost taste the fear and dust and decay as I read it.

Ruin Value is so far at least, the best book I have read this month, though ever the optimist with a week or so to go, it may be topped.  Definitely a case of right book at the right time!

The author has written several other mysteries though I know little about them.