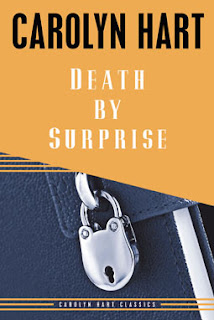 A woman is out to clear her cousin of murder charges after a blackmailer targeting the wealthy Carlisle family turns up dead.

K.C. Carlisle and her cousin Kenneth Carlisle both grew up rich. Kenneth is a corporate lawyer in an exclusive Northern California seaside community while K.C. has a storefront office on the seedy side of town. She takes whatever kind of case walks in her door.

But trouble appears one day when Francine Boutelle shows up pretending she wants to write an expose of the Carlisle family, including some dirt on K.C.'s late and highly respectable father. Francine has visited most of the family and is willing to keep the family secrets in exchange for cash.

When Kenneth is accused of murdering the blackmailer, K.C. is determined to prove his innocence, no matter where the trail of blood and deception leads.

Call me a caveman if you like, but prior to having an unexpected envelope drop on my desk containing an unsolicited advance copy of this re-issued novel, I had never heard of this author. It would be fair to say, I certainly know who she is now after quickly devouring this short-ish book.

Hart has authored over 50 books, in a writing career that launched in 1964 with the publication of her first novel, The Secret of the Cellars. She has several popular series to her name including the 23-book long, Death on Demand books which show no sign of abating.

Rich moneyed folk and lawyers to boot, some with political aspirations don’t tend to figure highly on my reading schedule. Coming from the mean streets of Dublin/Luton/Leighton Buzzard, where the dogs usually walk around in pairs............ok I’m joking......the point I’m trying to make is that generally my attitude is akin to; rich people – who cares?

Putting aside my immature prejudices and cracking the spine, I was soon engrossed in this satisfying tale of blackmail and murder. K.C. Carlisle probably passes for the most normal in her family and when her siblings and cousins seek to dismantle a trust for access to instant money she’s curious as to the motivations behind such a move. When Francine Boutelle arrives on her doorstep, the rationale becomes instantly clear. Even the straight-laced, up-standing K.C. has secrets she wouldn’t like aired in public.

Fast forward to the pre-ordained family conference and the strategy the family seeks to adopt is set. An option of murder isn’t on the cards, but with the blackmailer subsequently strangled with her cousin’s scarf and all of the family possible suspects in regards to motivation, K.C. - already suffering the body-blow of another close bereavement – tries to clear her cousin; albeit at the risk of swapping one family member for another in a prison cell.

Overall, I found Death By Surprise to be clever, interesting, enjoyable and satisfying.  It’s doubtful I would have been tempted by this book if I hadn't been the recipient of a review copy, but hey I’m happy to be surprised.

My thanks go to Meghan (doubly so) at Prometheus Books for my copy and another book by Carolyn Hart which I hope to be getting to shortly – Brave Hearts.
Posted by col2910 at 22:27