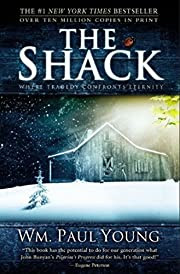 Synopsis/blurb...
Mackenzie Allen Philips' youngest daughter, Missy, has been abducted during a family vacation and evidence that she may have been brutally murdered is found in an abandoned shack deep in the Oregon wilderness. Four years later in the midst of his Great Sadness, Mack receives a suspicious note, apparently from God, inviting him back to that shack for a weekend.
Against his better judgment he arrives at the shack on a wintry afternoon and walks back into his darkest nightmare. What he finds there will change Mack's world forever.
In a world where religion seems to grow increasingly irrelevant The Shack wrestles with the timeless question, "Where is God in a world so filled with unspeakable pain?" The answers Mack gets will astound you and perhaps transform you as much as it did him. You'll want everyone you know to read this book!
I think I picked this one up years ago because of the cover. It gave off a Richard Laymon kind of horror vibe. The book itself couldn't be any more different, though you can't escape the fact that the abduction and murder of a child is truly horrific.
Spirituality, faith, grief, loss, family, anger, healing, forgiveness - all present in spades.
Did I like the book? Not particularly, but then I don't have a massive faith in a higher power. I think the book spoke more to the cynic in me than in any sort of eye-opening, spiritual awakening, St Paul on the road to Damascus fashion.