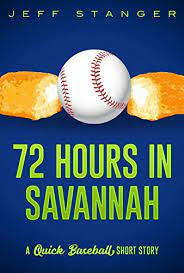 Synopsis/blurb...
Murder, Mystery, & Twinkies!
Jonathan Quick is in Savannah, just trying to find love and Twinkies. But the police have a different agenda. A body found at the local ballpark has a trophy sticking out of it. Not only is Quick the expert in identifying baseball relics, but he's also connected to the suspected killer. The police think revenge is the motive. Quick is sure it's greed. And now he has 72 hours to find the killer and the most valuable artifact in baseball history. It's a treasure hunt like no other in the land where pirates routinely buried gold and people who got too close to the truth.
I quite liked the sound of this one when I crossed paths with it. I like most sports and the backdrop of this story is set around baseball cards. I liked the collector aspect of it, having collected cigarette cards myself when I was younger. My dad was a numismatist as well as a card collector and we used to visit local fares a lot of weekends when I was growing up.
I have to admit I'm bemused by the finer detail of baseball, though I understand the general gist of the game - ie the aim, how to score and the no.s of innings, etc. It's the technical stuff and some of the terms that go over my head. I like reading about the history of the game and the revenance in which old players are held in. I found out a bit about segregation in the sport which was interesting.
I'm also a fan of humour (on occasions) in my reading and the comparisons to Carl Hiassen and Tim Dorsey sucked me in also. Not to mention a nice cover.
The story itself was well-written and played out ok. We have a murder and subsequently a bit of amateur sleuthing. Greed is our motivating factor and there is a bit related to an old pirate, which may or may not be rooted in fact of be a total figment of the author's imagination. I'm not sure and not especially driven to find out. I liked the main guy and I enjoyed the outcome. I wasn't rolling around the floor laughing at any point, so I'm guessing it wasn't quite as funny as the author thinks it is. Or conversely it's confirmation that I'm just a miserable old git.
Not bad for an hour's reading and it was time well spent. Not sure if I'm going to read more from Jeff Stanger. I may revert back to my Hiaasen's.