A couple from Canadian author, John Farrow (aka Trevor Ferguson). 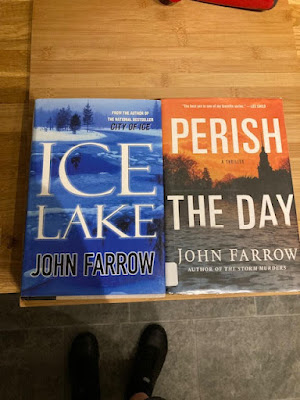 Farrow has written nine books in his Emile Cinq-Mars series, mostly set in Montreal. I've only read one to date in the series - Ball Park - which I really enjoyed. I have high hopes of reading my way through the series. We'll see how that works out!

Only the back of the corpse's head is visible, the remainder of the body is concealed in the murk of the frozen lake. Pulled up by his hair through the circular ice fishing hole, the victim bears the mark of a single bullet through his neck. It's official: Detective Emile Cinq-Mars knows he was lured here, the unknown woman's invitation to meet at a familiar ice fishing spot now transformed into a murder investigation. Only there's something different about this crime scene, something that tells the veteran policeman that in some way, his nose is being rubbed in this murder - in some way, this is about to become very personal.

Emile Cinq-Mars is an old-style detective - independent, eschewing technology and teamwork in favor of his smarts, his intuition, and a few well-placed informants. But his world is as contemporary and immediate as today's headlines, where pharmaceutical companies will stop at nothing to get a jump on the competition in the battle to find an AIDS cure. This is the world of Ice Lake, where the murder victim's ties to a drug company soon spin out of control into a complex universe peopled by a beautiful native activist trying to save the world, the ruthless members of organized crime sects, and the macho cops of competing police factions. It's up to the beleagured Cinq-Mars to figure out the conspiracies and counter-conspiracies, the difference between would-be frineds and deadly enemies - before it's too late.

Like its predecessor, City of Ice, Ice Lake has raised the bar in the thriller genre, dazzling in its plot and strikingly intelligent characterization. 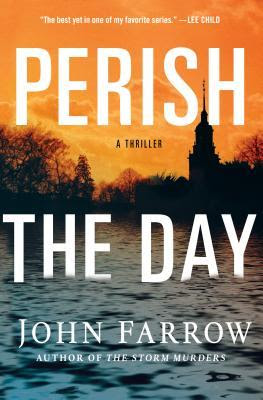 A coed is found murdered on campus, her body scarcely touched. The killer paid meticulous attention to the artistry of his crime. Coincidentally (or not), a college custodian is also found dead.

While Detective Emile Cinq-Mars and his wife are visiting the area, an epic rainstorm assails the Holyoake, New Hampshire campus. Amid overflowing rivers and downed power lines, a thirs crime scene is revealed: A professor has been shot dead in his home. A mysterious note is found that warned him to run.

Coming up against campus secrets, Emile Cinq-Mars must uncover the links between disparate groups quickly before the next victim is selected  for an elaborate initiation into murder.

Perish the Day is a riveting new mystery that continues the Emile Cinq-Mars series of crime novels, which Booklist has called 'one of the best series in crime fiction' and Die Zeit in Germany has suggested might be the best of all time. 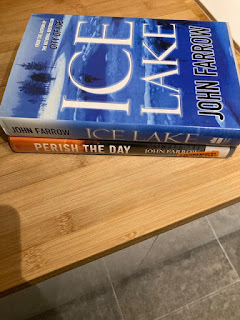