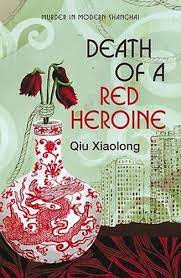 Synopsis/blurb...
SHANGHAI IN 1990. An ancient city in a country that despite the massacre of Tiananmen Square is still in the tight grip of Commnist control. Chief Inspector Chen, a poet with a sound instinct for self-preservation, knows the city like few others.
When the body of a prominent Communist party member is found, Chen is told to keep the party authorities informed about every lead. And he must keep the young woman's murder out of the papers at all costs. When his investigation leads him to the decadent offspring of high-ranking officials, he finds himself instantly removed from the case and reassigned to another area.
Chen has a choice: bend to the party's wishes and sacrifice his morals, or continue his investigation and risk dismissal from his job and from the party. Or worse...
Death of a Red Heroine was a really interesting read for several reasons. It's a slow burner of a murder investigation where the main detective's efforts to find the victim's killer are hampered by political interference.  It's also a look inside the culture of a country, just about to undergo tremendous change economically. It does make me wonder why I sat the book on my shelf for over ten years before reading it.
I read this one slowly, about 15 - 20 pages a day over the course of the month, and I think this approach helped me enjoy the book more. The main character, Inspector Chen is thoughtful, intelligent and has a real sense of right and wrong. His moral compass compels him to continue with his pursuit of the killer, despite the danger to himself. He does have enough political savvy to at least act with some caution in his efforts. He's also a poet and there are a lot of passages in the book where we see how important his writing is to him.
There's a great dynamic between Chen and his assistant Detective Yu and they work well together, despite Yu's initial doubts about the case and the partnership. I think it's a series I would enjoy reading more from if I crossed paths with another book in it. I don't think I could commit to reading them all - there's about a dozen in total. The partnership between the two is one I really liked, from initial caution and a slight resentment, mainly on behalf of Yu, to total confidence in each other. I would also enjoy seeing the author chart the changes in society as the country becomes more Capitalist in outlook, while still retaining its strong control over it's people.
It's also interesting to note that despite the massive cultural differences between the Western and China that in a lot of respects things are very much the same. Power, influence, connections, all seem to offer a shield against consequences. Laws are only meant to apply to the little people. Rules are for others. Nice to see that sometimes chickens come home to roost.