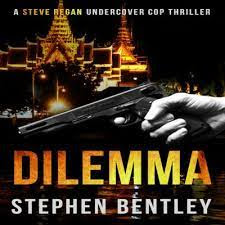 Synopsis/blurb...
When you are undercover, many want to kill you.
Sicilian Mafia, Thai Mafia, even the CIA, they all want you dead.
Join undercover cop Regan in this emotion-packed roller coaster of a thriller.
Steve Regan is back and this time he’s alone and undercover in a seedy area of Thailand on the trail of a Texan expatriate, Les Watkins, the biggest drug smuggler in South East Asia.
Using himself as the bait, Regan attempts to score a $50,000 deal with the Thai mafia to get closer to his target.
As he finds himself embroiled deeper into the operation, Regan suspects Watkins may be connected to Regan's nemesis, ruthless Mafia boss Carlo Vitale, who has fled the United States following a triple bombing and assassination of three crime family heads.
Besides staying alive, Regan has other problems when he suddenly finds himself facing the worst dilemma an undercover cop can face.
Dilemma is an edgy, suspenseful tale with twists and turns plus a sprinkle of romance.
Though Book 3 in the Steve Regan Undercover Cop series, it can be read as a standalone book.
If you are a Reacher or Tom Clancy fan, this book is for you.
I think it might be a bit of a stretch comparing this to Lee Child's Jack Reacher books. At best, it was tolerable, even ok, but by no means amazing or memorable.
The main character is Steve Regan, an undercover cop. Bentley has written 3 or 4 books with Regan as his main protagonist and its a series I've come at ass-backwards. Rivers of Blood which follows this was enjoyed back in September. In Dilemma we switch further back in time to Regan in Thailand trying to set up a sting on some American mafia-types.
Undercover work, Thailand, the sex trade, drug deals, mafia involvement, police corruption, romance, an encounter with an old adversary,  danger, violence, close scrapes, death, revenge and new beginnings.
Lots going on. Not the worst book I've ever listened to, but as before the narrator had a tough time with the different accents. Most of them come across as fake and exagerrated, like a 70s third rate stand-up comedian telling unfunny dated jokes in a working man's club. Maybe I'm being over-critical. If the dialogue has been enunciated in his normal English accent, I'd have been picking fault at that as well.
The storyline was ok, if a little basic and predictable. Good guy vs bad guys. Regan is a defender of law and order, women's virtue and he loves his mum. He doesn't like people badmouthing the bar girls and his mama-san. He has frequent doubts over his mission and fears the temptation of going rogue. He just comes across as a little bit two-dimensional and by extension a little bit unbelievable. Most of the other characters are cut from the same cloth.