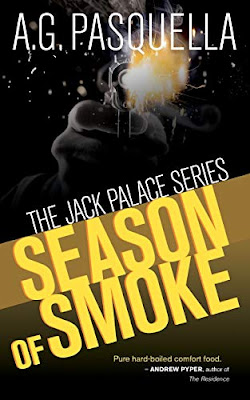 Synopsis/blurb...
It looks like ex-con Jack Palace’s troubles will never end when he is pressured by the mob to kill one of his best friends.
Jack Palace is trying to go legit with his own security company — but his old life keeps trying to pull him back in. A mobster named Sammy DiAngelo wants revenge for a killing that happened in Jack’s past. DiAngelo blames Jack’s friend Grover for the murder and gives Jack an ultimatum: kill Grover or be killed himself. Meanwhile, Grover has plans of his own. He wants to rip off the mob, and he needs Jack’s help to do it.
Jack is desperate to start a new life with Suzanne, a woman from his past … but is he desperate enough to kill?
My second outing with author A. G. Pasquella and his main character, Jack Palace. Season of Smoke is the third in the series after Yard Dog and Carve the Heart. I do think it's a series that might best be enjoyed in order, as a lot of events and character motivations are related to incidents from the earlier books. That said, I really liked this one.
Jack is an ex-con and is trying to go straight. The world doesn't seem to want to let him. There's a bounty on his head with a Mafia boss gunning for Jack. Jack's stuck between a rock and a hard place. Side with the Mafia and kill his friend and he might be off the hook, somewhat unlikely given Sammy DiAngelo's vindictiveness. Side with his friend and help kill DiAngelo, while also stealing his money and he kind of kisses goodbye to the straight life he had imagined for himself. A life that has become a little bit more complicated with the reappearance into his life of an old flame.
Economic reality and a failing business are also help nudge him in a direction he really doesn't want to go. As tough as it is struggling to give up the drink, departing a life of crime proves to be a slightly more difficult obstacle for Jack to overcome.
There'a real cadence and rhythm to the story here that kept me turn the pages. I really liked Jack as a character and I was rooting for him throughout to initially stay on the straight and narrow and make a success of his security business, especially as he had guys relying on him. Once his options became a little bit more limited, especially after the fire-bombing of his trailer and an encounter with 'Mr Butterface', a vicious sadist, woman abuser and hitman, I just wanted Jack to let rip and get on with things.
Great writing, great story, cracking outcome and plenty of thrills along the way. There's an inevitability about the tale in that its pretty much a given that the life of ordinary citizen doesn't seem to be in Jack's future. A Toronto setting is another plus. I do like me some Canadian crime. 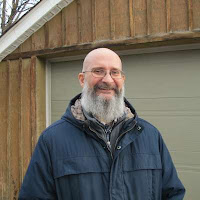